Yesterday, the WTO dispute settlement system received its 500th formal request for consultations. Because members may only request a WTO panel after unsuccessful consultations, filing such a request is the first step in the initiation of WTO disputes. For this reason, the request for consultations, without being per se a contentious act, signals the willingness of the member requesting consultations to take a dispute to adjudication. Between 1995 and 2015, therefore, the WTO received almost 24 disputes a year – an impressive amount for a purely inter-state dispute settlement system. Confirming the tendency of increased participation of developing countries, the 500th request was filed by Pakistan and targeted a measure imposed by South Africa.

I took this opportunity to undertake a small and very simple (some might say crude) quantitative exercise: who are currently the main WTO litigators? If we go back to 1995, the US and the EU will clearly dominate (the WTO helpfully provides a map of disputes). However, China only joined the WTO in 2001, and Russia in 2012. Thus, a more helpful exercise is to look at the last few disputes. I therefore examined the 50 disputes that were initiated last (DS451-DS500), looking for new trends in who the most active disputing members are. Although the number 50 is clearly arbitrary, the first dispute to appear on this list was initiated on 15 October 2012, i.e. three years ago, and shortly after the accession of Russia, which was a milestone in the WTO’s march from a ‘club’ of Western nations to a global international organization.

In order to avoid too much distortion from exceptional situations, I also examined the last 100 disputes (DS401-DS500), which takes us back six years to 5 November 2009. As a sign of how arbitrary the samples are, I observe that the last dispute to make it to the 100-dispute sample is the EC – Seal Products dispute initiated by Norway and numbered DS401. A dispute challenging the same measure, initiated by Canada three days earlier, was numbered DS400 and is therefore not part of my sample.

The sole information examined in this quick exercise are the names of parties, i.e. of the complainant and of the respondent; I did not include information on third parties. Additionally, sometimes a single issue was litigated more than once against the same party. Thus, Indonesia appears as a respondent in five disputes, all of which concern the same measure, and the Dominican Republic was challenged by four different members for the same measure. I did not attempt to eliminate or control for these distortions.

The data relating the last 50 disputes provides a number of interesting insights. As could be expected, the EU appears as the most active user of the system with 18 disputes. But Indonesia appears in second place with 13 disputes, just ahead of the United States and China with 10 each. Russia confirms its big player status and appears in fifth position with 8 disputes. Japan appears next with 5 disputes, always as a complainant. Together, these five members dominated WTO litigation, taking 64% of the ‘spots’ available for complainants and defendants. The remaining 36% are reasonably well distributed among other litigating members, including members traditionally perceived as big users of the system such as Brazil (3 disputes), Australia, or India (2 disputes each). However, the total number of ligating members (25) is merely 15.5% of the total number of WTO members, meaning that five out of six members have not even brought a request for consultations over the past three years. 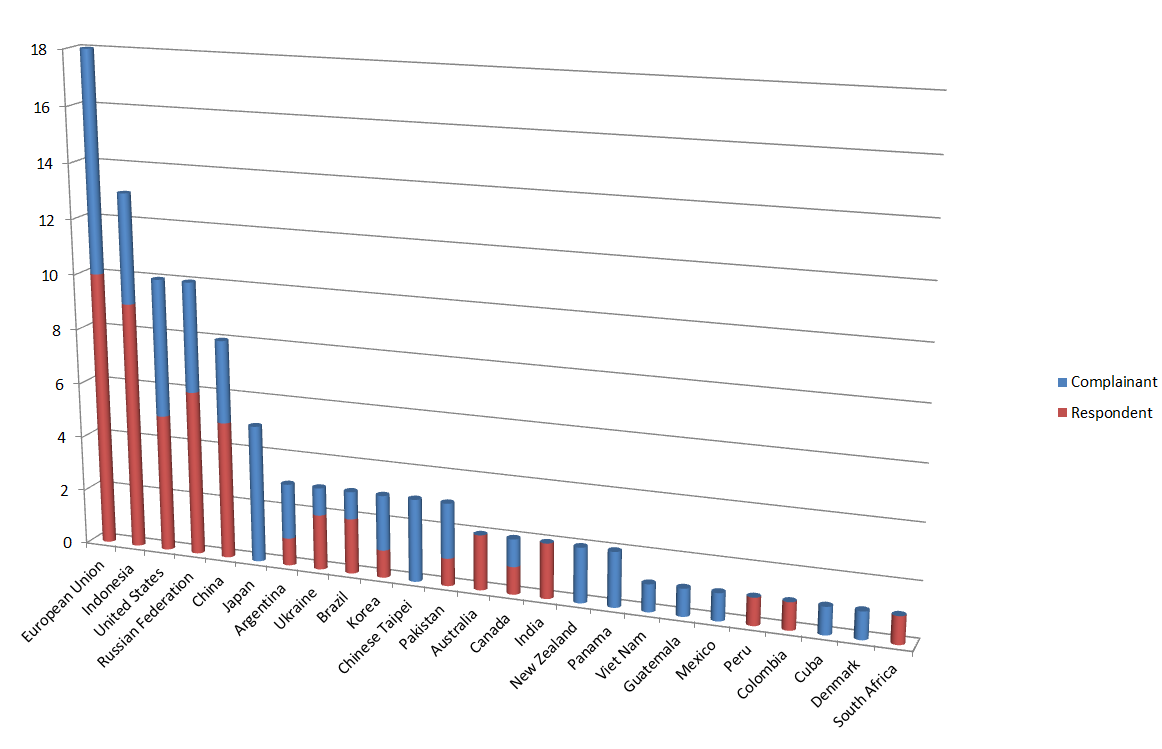 As regards the 100 last disputes, positions change at the top, with the United States (32 disputes) overtaking the EU (30) as the top litigant. China also appears clearly as the third ‘great power’ of WTO litigation with 23 disputes, with Indonesia (15), Argentina (11) and the Russian Federation (10) showing up next. Japan confirms its recent status as complainant-only, having initiated more disputes than China (8 against 7) but not having been targeted at all under the DSU. Ukraine appears next with 7 disputes, more than India’s 6. With 5 disputes we have Australia, Brazil, Korea and the Dominican Republic. Canada appears next with 4 disputes, and other 21 members have been in between 1 and 3 disputes over the past six years. 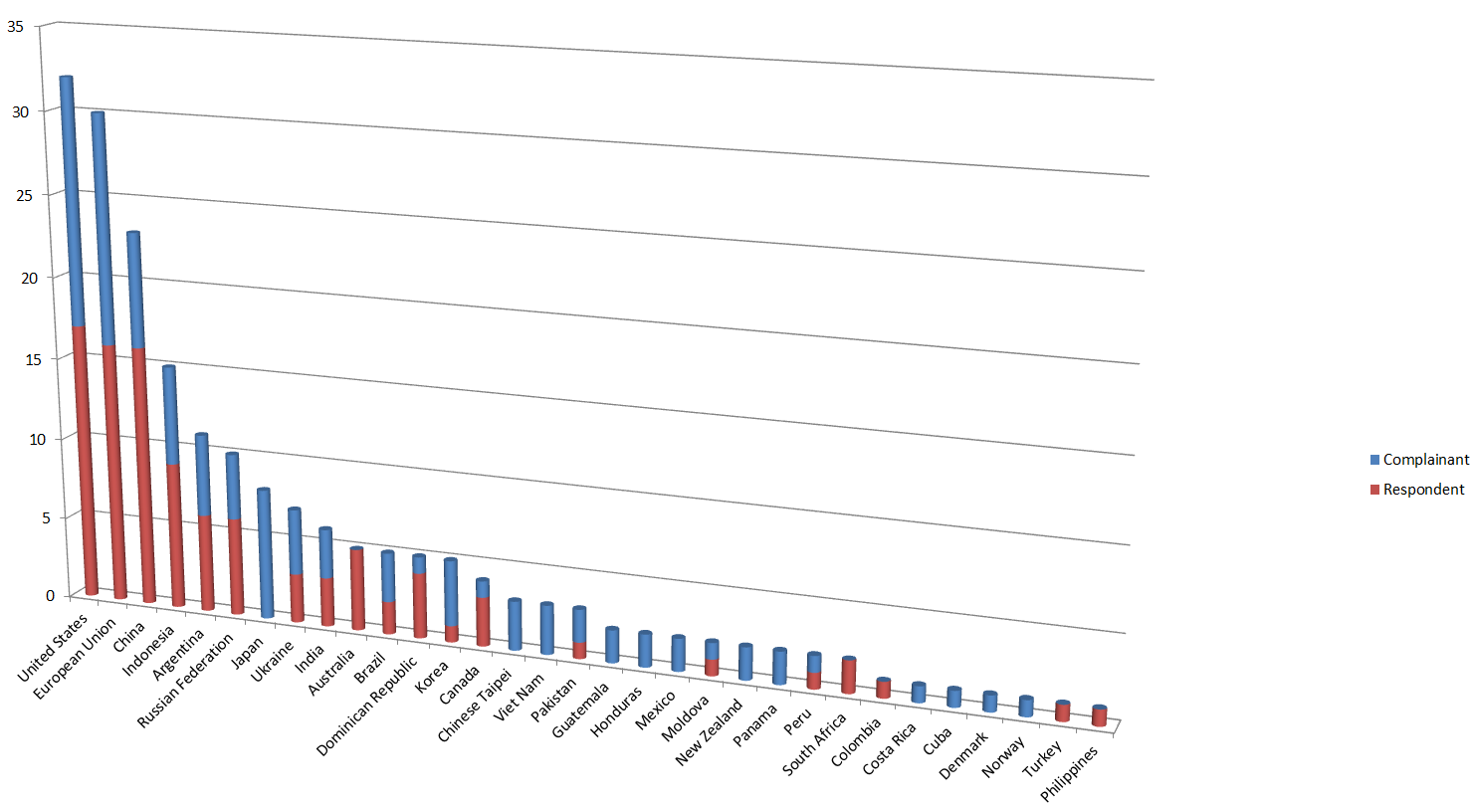 More broadly, what do these charts tell us? First, the protagonists in WTO dispute settlement are few. Out of 161 members, only 34 (21%) have litigated the last 100 disputes. Of these, twelve (7.5%) have alternated as complainants and respondents in over 80% of litigation. Presumably the number is even lower once one checks for disputes actually litigated – the data refer solely to requests for consultation. Thus, a vast majority of WTO members simply do not channel their trade disputes through the Dispute Settlement Understanding. Unless one is to argue that these members do not have disputes in the first place, it would be interesting to know how these disputes are being settled.

Second, the number of disputes bears a certain relation to trade flows, but is clearly influenced by political factors. Russia and Argentina are perhaps the most obvious outliers in this category, together with Ukraine, due to disputes that may plausibly have been initiated more for political reasons than for economic ones. Indonesia’s consistently high level of activity is more difficult to explain, and in fact extends beyond the period of time analyzed (it was a party to 23 disputes overall, the same number as Australia). I would be happy to hear of possible explanations for the contrast between this number and the relatively low profile of Indonesia in WTO negotiations.

Finally, there is a telling pattern in terms of regional distribution. Much of the litigation still occurs between major trading nations, as would be expected. However, it may be noted that only two of the last 100 disputes have pitted the EU against the US. Those who have been arguing that TTIP might lead to a serious loss for the WTO dispute settlement system should take note. At least in terms of number of disputes, EU-US disputes no longer dominate the field. Rather, much of the ‘great power’ litigation these days is US-China (12 disputes) or EU-China (7 disputes). For China, these two sets constitute 19 out of its 23 disputes, the remaining ones being against Japan (2 disputes), Canada, and Mexico.

In terms of regional disputes, Asian countries increasingly litigate against each other, a clear consequence of the rise in trade within the region. Latin American countries have been using the WTO system extensively, very often against each other (Argentina and Brazil are the exceptions, litigating mainly against large countries outside the region). Former Soviet countries such as Armenia, Moldova, and Ukraine have also taken advantage of their membership to bring their (mainly regional) disputes to the WTO. By contrast, the only African country to appear at all in the last 100 disputes is South Africa.

In fact, the virtual non-participation of African countries is perhaps the most intriguing of the story these charts tell. Even looking beyond this dataset, only two African countries – South Africa and Egypt – have ever participated as parties in WTO dispute settlement. This contrasts with what happens in investment law, where African countries have been extensively targeted by investors. Even in the WTO, their participations have been limited to the role of respondent (or third party). Thus, no African country has ever brought a dispute (i.e., not even a request for consultations) to the WTO. Although one should not ignore the historically small share of African countries in world trade, the comparison with countries such as Guatemala or Moldova still reveals an obvious discrepancy.

This would not be a problem if it were a result of a lack of trade disputes, but this is unlikely to be the case. Another explanation would be that African regional disputes are settled by regional courts – Africa has a number of very active regional courts. In their relations with large WTO members, however, African countries simply do not resort to dispute settlement at all. This may mean that disputes are being settled politically, without reference to the WTO’s carefully negotiated rules.

Of course, no one would argue than litigation is a good thing in itself. But the total absence of resort to the multilateral dispute settlement system casts doubt on whether disputes between African nations and other countries are being settled under the ‘shadow of the law’, i.e. within the rules-based spirit which the dispute settlement system attempts to infuse into inevitably political trade relations.

Geraldo Vidigal is Associate Editor of EJIL:Talk!. He is a Senior Research Fellow at the Department of International Law and Dispute Resolution of the Max Planck Institute Luxembourg. His research interests include international economic law, regional agreements, and international dispute resolution, with a focus on the role of international courts and tribunals in the establishment and enforcement of international obligations. Read Full
More posts by the Author »
EJIL: Live!