UNCITRAL and ISDS Reforms: Moving to Reform Options … the Politics

UNCITRAL and ISDS Reforms: Moving to Reform Options … the Politics

In the last blog, I provided an update on the UNCITRAL process, including the consensus decision from Vienna last week to move forward to consider possible reforms of investor-state arbitration. This decision is very significant. But to get a sense of how this decision was reached and where the process might be heading, I thought it would be helpful to provide my sense of the politics of the process as well as some projections about how it might move forward.

As stated previously, I am a member of the Australian delegation but I am included in that delegation in my independent academic capacity, so nothing in my writings or talks should be taken to reflect Australia’s views. My academic views are exactly that: mine and academic. Nevertheless, I hope that these views are informed. These blogs are based on official interventions during the UNCITRAL plenary sessions as well as discussions with a diverse range of actors from the process.

Let me start with some of the politics and atmospherics. I focus here, as previously, largely on the states, leaving for others to chart the role of the non-state actors.

One reason that states agreed to consider ISDS reforms at UNCITRAL was that it was a multilateral forum that permitted wide participation by states and other interested actors. UNCITRAL has certainly delivered on this score. Over 400 delegates registered for the meeting in Vienna. Importantly, a significant number of new states from the developing world, particularly Africa, joined the meeting for the first time. This was partly due to the UNCITRAL travel fund, newly replenished courtesy of the European Union and Switzerland. It was also because of the active role of NGOs in seeking to encourage attendance by these states.

The old camps of incrementalists and systemic reformers were evident once again. However, some divisions could also be detected within the established camps, at least with respect to tone and strategy. For instance, Mauritius was forceful, explicit and keen to get states to declare their hands as incremental or systemic reformers, whereas the European Union was more restrained and patient and made no moves to divide the room in this way. Japan made points early and late in the week on process, much more so than the United States and Chile, leading to the perception by some that it was “filibustering.” Canada seemed supportive of multilateral reform options, but also took the time to note some of the positive developments in the CPTPP.

Some states did not speak often, but still made significant interventions. For instance, on day one, China proposed the plan that the Chair ultimately adopted in calling for states to put forward proposals on the next steps in the work plan before the New York meeting. China also reiterated its view that inconsistency and incorrectness were problems in the system and that the existing mechanisms of review (annulment and judicial review) were inadequate. But it took a more measured approach on the concerns raised about arbitral appointments, indicating that it didn’t necessarily believe there was a problem with the party appointment mechanism itself. This might indicate that China is warming up to a position of supporting ISDS, with possible improvements, but subject to an Appellate Body.

South Africa did not speak much but clearly indicated that some of the concerns raised required at least systemic reform (using that word for the first time) and, importantly, that procedural reforms were not enough. According to South Africa, states needed to take holistic approaches on both procedural and substantive reforms in order to gear investment protection to the ultimate goal of sustainable development. Brazil reiterated its approach of rejecting investor-state arbitration in favour of state-to-state arbitration. These paradigmatic reformers seem to be content with leading by example and do not appear to be coordinating. They are following the process without actively trying to develop their own followers.

A number of states were more active this time around than previously, including Cameroon, Cote D’Ivoire, Dominican Republic, Egypt, Indonesia, Iran, Kenya, Korea, Germany, Morocco, the Netherlands, Thailand, and Vietnam, with most if not all calling for reforms. By contrast, Russia was much less vocal than previously, saying nothing on issues like inconsistency, though affirming again the importance of party appointment. This prompted speculation by some about whether its approach had softened. Other important states were silent despite considerable experience with the system, including most notably India.

Projecting forward is always hard and not always reliable. Despite this, let me give you my best guess of where the politics of this is going.

First, there seemed to be clear momentum in the room for considering some sort of systemic reform, so I find it hard to imagine that a Multilateral Investment Court and/or Appellate Body won’t be one of the reforms being considered in New York. The bigger question to me is whether some of the states that are less keen on this multilateral solution will propose working on other options, such as a range of incremental reforms like developing a code of conduct or putting together a series of “best practices” on issues like multiple proceedings, non-disputing party submissions and frivolous claims.

Second, if a range of reforms were to be considered, I doubt that there would be a consensus agreement to consider the incremental options first. Some states might say that it would be logical to start with smaller and more universally agreed upon reforms (like a code of conduct) before moving onto larger and more controversial options (like a court). But delegations that want more systemic reform – which I expect will be a majority – are unlikely to sit by patiently while incremental reforms are discussed given that states could take years to work through these options. This conclusion is particularly so as some states view the incremental option as being strategically used to delay consideration of multilateral reforms.

It might be possible to consider an “a la carte” range of incremental and systemic reforms in the format of an opt-in Mauritius-style convention. Any given reform would apply only if both parties to an investment treaty had opted into that reform (a “Tinder Treaty”). But if the Working Group were to agree to consider a range of reforms – which is an “if” – it seems to me that that would be only if it also agreed to consider these on a concurrent basis. Different reforms could potentially be considered by different sub-groups within Working Group III or possibly even different working groups. For instance, Working Group II could perhaps work on a code of conduct while Working Group III worked on a standing body. Some incremental reforms might also be worked on in conjunction with other bodies, such as ICSID and the PCA.

Third, it is possible that a state or series of states might put in a proposal to work on an Appellate Body without also working on the two-tiered Multilateral Investment Court. There was general agreement by states in the room that inconsistency and lack of a procedure to ensure correctness was a problem requiring reform. On arbitral appointments, however, many states recognized that there were problems in the system (e.g., perceptions or realities of pro-investor and pro-state bias, lack of diversity and perverse incentives), but a significant number also raised the importance of parties getting to select their own arbitrators. Yet no state has emerged to champion a stand-alone Appellate Body so far.

I would not be surprised if more states ultimately end up being in favour of an Appellate Body than a two-tiered Multilateral Investment Court. That being said, some states might ultimately conclude that they cannot adequately address issues like independence, impartiality and diversity while keeping party appointments. In this regard, Pluricourts provided what one delegation exclaimed were “head-turning” statistics, such as that women account for only 9% of arbitral appointments, that 86% of these go to just two “formidable women,” and that the rate of improvement is so small that women would not be set to achieve 25% representation until 2100 and parity in 10,000. Regional diversity statistics also troubled many delegations.

The European Union is unlikely to give up easily on its two-tier solution given its belief in reform and the toxicity of “private justice” in some of its domestic settings. One option would be to try to get agreement on considering an Appellate Body first and a Court second. But if you want an integrated system at the end, this seems far from ideal. Probably a better move would be to consider both at the same time but with a flexible open-architecture structure that allowed states to sign onto either the first level court and/or the appellate mechanism. That would permit a larger body of states to agree to some level of systemic reform, with each one selecting the reforms that best suited their needs coupled with a Tinder-style matching approach.

Finally, there may be debates about what counts as “systemic” or “multilateral” reform. Some states might propose that the Working Group needs to first identify some of the best practices that have been adopted in recent treaties (e.g., the CPTPP) and other reform processes (e.g., the ICSID Rules), then assess whether these practices have been successful in addressing some or all of the identified concerns, then consider whether these practices could provide multilateral or systemic reform through a Mauritius-style convention, and only then identify whether additional systemic reforms might be needed to address remaining concerns. I expect that many delegations in the room would view such a proposal as a delay tactic, even if they considered some of the recent innovations to be worth pursuing in their bilateral approaches.

Although states were not meant to debate potential reforms in Phases 1 and 2, “different solutions lurked in the room like elephants, often seeming to inform the positions taken by various delegations on whether particular issues.” When attempts were made to talk about Phase 3 reforms during the plenary sessions, many actors were quick to shut them down in order to follow the carefully sequenced mandate. During that first session in Vienna, I recall circulating this cartoon to some colleagues as it seemed to be clear that the EU’s Multilateral Investment Court proposal was the elephant in the room. 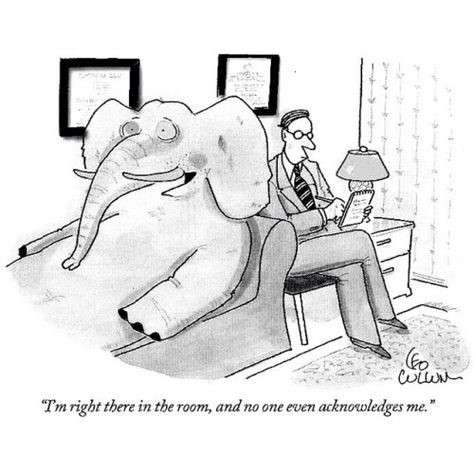 By the time we get to New York, I expect that the elephant proposal will have formally entered the room, though at a high level of generality. Whether or not UNCITRAL ultimately decides to move forward with focusing on a single reform or a suite of reforms, it is going to have to start somewhere. Hence New York is likely to be a menu planning session. And, as one non-state delegation stated during the week, “How do you eat an elephant? One bite at a time.” I think that I know what the main course will be. It will be interesting to see if it comes with any appetizers or side dishes.

Anthea Roberts is a Professor at School of Regulation and Global Governance (RegNet) at the Australian National University and a Visiting Professor for the Masters of International Dispute Settlement at the Graduate Institute and the University of Geneva. Anthea attends UNCITRAL Working Group III as part of the Australian delegation but she acts and writes in her independent academic capacity. She is a specialist in public international law, investment treaty law and arbitration, comparative international law and geoeconomics. Prior to joining the ANU, Anthea taught at the London School of Economics, Columbia Law School and Harvard Law School. She is serving or has served on the editorial boards of the American Journal of International Law, the European Journal of International Law, the Journal of World Trade and Investment and ICSID Review. She is also a Contributing Editor for EJIL: Talk! and Read Full
More posts by the Author »
EJIL: Live!