While many international lawyers around the world scrambled to debate the US use of force in Syria, quiet and unprecedented shifts took place the same week in international economic law. On 10 April 2017, the International Monetary Fund, World Bank, and the World Trade Organization launched their Joint Report, “Making Trade an Engine of Growth for All: The Case for Trade and for Policies to Facilitate Adjustment”. (Markus Wagner thoroughly discusses the Joint Report and his concerns about its salience here.)

The Joint Report demonstrates how these three multilateral institutions perceive themselves, at a time of critical rethinking of the international economic order and resurgent economic nationalisms in the United States, Britain, among others. IMF Managing Director Christine Lagarde, World Bank President Jim Yong Kim, and World Trade Organization Director-General Roberto Azevedo met in Berlin for the launch of the joint report, speaking in defense of the positive impacts of trade and noting that “we must recognize the concerns of people about trade and the impact that it can have in their lives…we need to ensure the benefits of trade are shared more widely. We should also recognize at the same time that 80 percent of the jobs that are lost today in the advanced economies are not due to imports. They are lost because of new technologies, innovation, and higher productivity.” While the Joint Report resounds a strong defense of trade’s value for achieving economic growth (and certainly resonates similar reasoning articulated by Harvard Economist and President Emeritus Lawrence Summers on the significance of trade deals and the ultimate insignificance of trade agreements on deeper macroeconomic concerns of shrinking middle classes), the Joint Report falls short of the mark in attempting to fully address global concerns about the displacing impacts of trade on workers, local communities, individuals and groups.

It is clear from the report that the IMF, WB, and WTO perceive that criticisms against trade arise when States’ poor domestic policies on trade adjustment, labor mobility, and social protection, combined with the rising challenges from automation, are unable to mitigate negative impacts of trade on workers and local communities (paras. 36-42). The joint report goes on to affirm that these negative impacts “highlight the need for appropriate adjustment policies, rather than for closing markets” (para. 42). What stands significantly from this joint report is its typology of policy alternatives that the IMF, WB, and WTO suggest States consider in devising their trade adjustment programs:

The Joint Report usefully synthesized their menu of suggested measures in the following diagram: 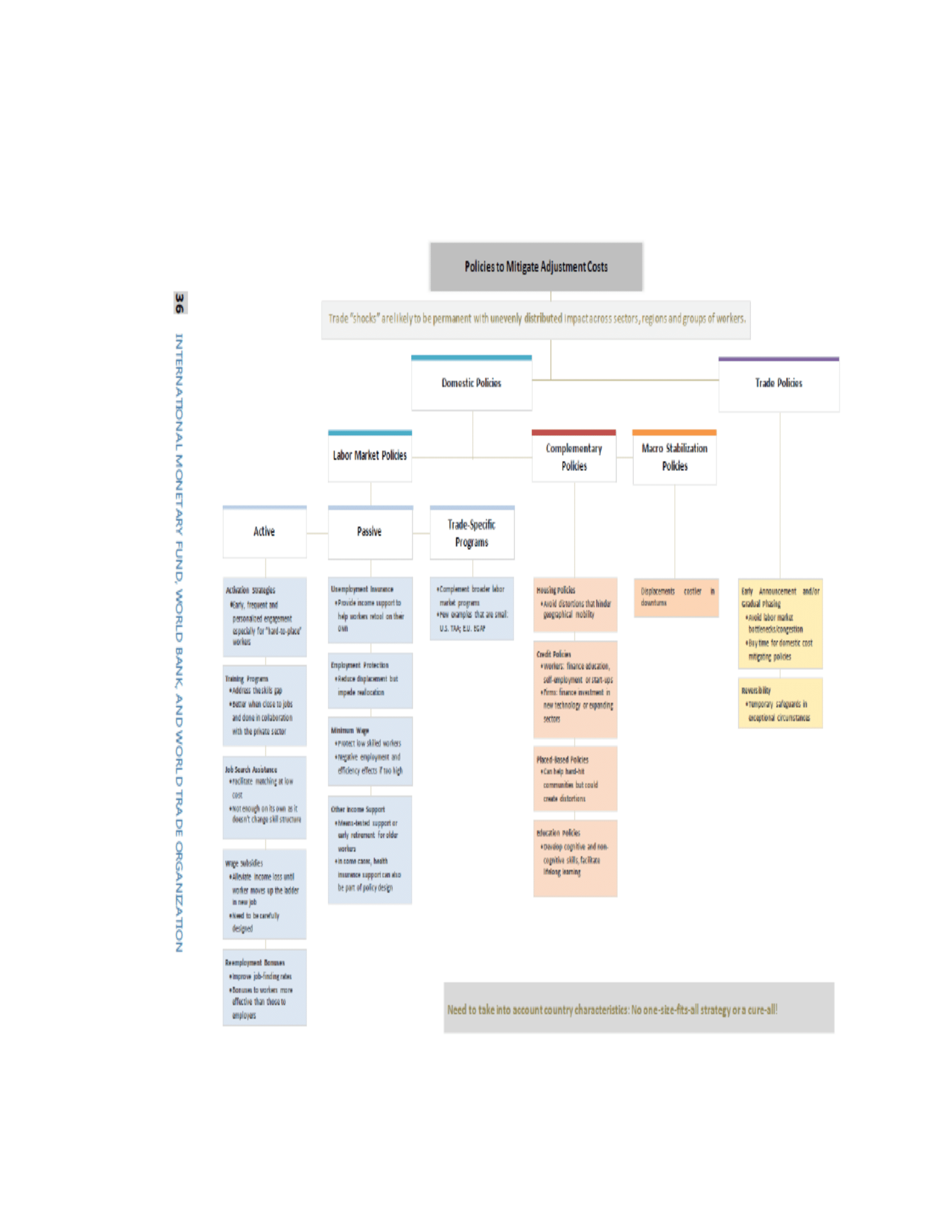 What was a significantly missed opportunity from the IMF, WB, and WTO Joint Report is any discussion whatsoever of States’ obligations to ensure that they respect, protect, provide, or facilitate economic, social, and cultural rights (ESC rights) – all of which could, and should, as a matter of international law, be seen to form the core of State values that would drive any regulatory baseline of trade adjustment policies and measures.   Beyond listing a typology of possible adjustment measures based on country experiences and selected empirical studies, the Joint Report left out any reference to States’ treaty commitments under the ICESCR and related labor, environmental, cultural, social protection, and educational treaties. Instead, the rest of the Joint Report generally referred to the positive benefits of trade-related policies in “playing a role in easing adjustment” (para. 66), where “various avenues of cooperation can help to make trade stronger and more sustainable”, (para. 67).  The Joint Report noted in passing that “labor provisions have been included in certain RTAs…whether done through a trade agreement or other means, international cooperation on labor standards can take appropriate account of local conditions, without necessarily requiring that standards be identical across countries in different circumstances”, and that “a shared commitment to environmental standards can, in addition to environmental benefits themselves, help to reassure domestic firms and workers that they are not disadvantaged by strong environmental standards at home” (para. 67).

The Joint Report did not comment on the status of implementation of the WTO Decision on Trade and Environment, the WTO’s consensus on core labour standards through the International Labour Organization, the urgent implementation concerns raised by developing countries in meeting commitments under the Doha 4th Ministerial Conference, or even discuss the threshold question of the WTO’s role in trade adjustment. (As Chad Bown argued ten years ago, the WTO has yet to decide whether WTO provisions “currently create an environment that is pro-adjustment, anti-adjustment, or adjustment-neutral”).  Separate from the litany of empirical evidence summarized in the Joint Report to affirm the conventional wisdom that trade openness generally is growth-creating, however, the Joint Report lends the impression that it is ultimately just up to States to craft domestic policies as best they can to cushion the impact of ‘collateral damage’ from trade – job losses, firms going out of business, obsolescence in goods and services – that results from diminishing market competitiveness. There is no “one-size-fits-all” basket of policies, and all that the Joint Report proposes is its synthesis of trade adjustment measures culled from numerous economic and empirical studies.  In this sense, the Joint Report still appears fairly unresponsive to global currents from populations around the world dissatisfied with the distributional consequences of the world trade system (a matter that it scarcely devoted more than ten pages to in past reports).

But is trade adjustment truly just a matter of the State’s reserved domain of sovereignty? What the Joint Report fails to consider is that trade adjustment is not merely a matter of discretionary government policy, but should also be conceptualized as a matter of crucial implementation of international human rights law. For example, in formulating labor-market policies through active and passive labor market programs, much reflection should be taken by States of their duties and obligations in ensuring the right to work and the enjoyment of just and favourable conditions of work (International Covenant on Economic, Social, and Cultural Rights, or ICESCR Articles 6, 7, and 8). Housing policies as part of complementary trade adjustment policies also have to be seen from the prism of the State’s baseline obligations and progressive realization of the right to an adequate standard of living, including housing (ICESCR Article 11), while education policies have to be informed by State commitments on the right to compulsory primary education (ICESCR Article 14) and rights to secondary, higher, and fundamental education (ICESCR Article 13). Instead, while acknowledging the importance of “trade and trade related policies not just in promoting growth and prosperity but helping to share that prosperity more widely” (para. 81) and the “role of supporting domestic policies and prompt attention to those individuals and communities at risk of being left behind” (para. 79), the Joint Report was ultimately silent on how trade adjustment policies are to be designed in a manner that deliberately builds in State commitments to ICESCR rights protection and progressive realization.  As the Committee on Economic, Social, and Cultural Rights illustrated in I.D.G. v. Spain (Communication No. 2/2014, 13 October 2015), a State’s mortgage foreclosure enforcement procedures (itself traditionally the domain of domestic law) have to be brought in line with the ICESCR.  States’ trade adjustment, social protection, and fiscal consolidation measures are all areas where domestic policy-making should be brought in line with international law under the ICESCR and related treaties.

As I have discussed in more detail in previous work (see among others Public Policy in International Economic Law: The ICESCR in Trade, Finance, and Investment, OUP 2015), States’ distributional choices in international trade agreements are no less immune from their continuing commitments under the ICESCR (and related international labor, environmental, and lex specialis treaties) to preserve, and keep progressively realizing, their obligations to respect, protect, provide or facilitate, the ESC rights owed to their respective populations. At this juncture of the challenged international economic system – and as highlighted no less than by the IMF, WB, and WTO’s joint report – States can no longer afford to rest on the myth that trade decisions made by economic agencies are insulated from the social protection, health, education, and labor commitments that States have long since made under the ICESCR and related treaties. The IMF, WB, and WTO Joint Report conveys at least some sense of institutional openness on the part of these three global institutions to engage States, trade law experts, policymakers and scholars on rethinking the structure, design, and wisdom of trade adjustment policies. It is a crystal opportunity to embed the implementation of ESC rights into these policies, and not leave them as an afterthought in the international economic system.

« Reflections on the European Co...
Announcements: Business and Hu... »
Comments Off on Trade Adjustment IS A Matter of Domestic Policy and International Law: Embedding ESC Rights in Trade Law