The Greek Sovereign Debt Crisis, the Right to be Free from Economic Coercion, and the Greek Election

The Greek Sovereign Debt Crisis, the Right to be Free from Economic Coercion, and the Greek Election 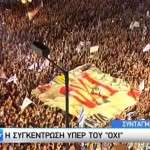 People gathered at the ‘NO’ rally ahead of the Greek Referendum in early July.

The Greek sovereign debt crisis has occasioned much discussion on a number of issues that are of interest to international lawyers, in particular after the 25th of January 2015, when the left-wing SYRIZA party (Greek acronym of the full name, literally the ‘Coalition of the Radical Left’), having won the election by some considerable margin, formed a government whose strategy was to challenge Greece’s creditors over the much despised (in Greece, that is) Greek bailout programme. These issues include: the question of the odiousness of Greek debt (and whether it can be repudiated; interestingly the UN GA passed a Resolution on 11 September 2015 regarding the ‘basic principles on sovereign debt restructuring processes’, during the vote for which the caretaker government of Greece opted to abstain), the issue of German reparations and of the compulsory war loan of 1942, as well as the issue of economic coercion into a new bailout agreement (commented on here) which Greece accepted in July and August 2015 (and which led to the splintering of the governing party and to fresh elections scheduled for September).

In this post, just ahead of the snap election that has been called for 20 September 2015, I will briefly discuss the bailout programme between 2010 and 2014 and explain the arguments on the basis of which it was challenged by the SYRIZA-led government (section I). Then I will describe the negotiation which led to the new agreement, which has been seen (in many circles at least) as an attempt at regime change in Greece (section II). Finally, I will argue that this episode does not constitute unlawful economic coercion, as there is no right of a State to be free from economic coercion in international law (section III). That subject I treat in much more detail in a paper written for the project led by Dan Joyner and Marco Roscini on the ‘Fundamental Rights of States’. The paper is now available on SSRN and will appear, along with other relevant papers, in a special issue of the Cambridge Journal of International and Comparative Law.

One of the aftershocks of the 2008 financial crisis was that Greece was locked out of international markets, having borrowed quite heavily from (mainly German and French) private banks ever since joining the Euro in 2001. There are many reasons why the Greek State borrowed so heavily as to load itself with an unsustainable debt during that period. They include the chronic corruption in Greek politics and the State apparatus (Greece has been governed by and large by 3 families in the last 60 years, with the interlude of the military dictatorship 1967-1974), the shock of cheap credit due to changing from a rather unstable to a hard currency (and the resultant rise in prices), and the collusion of the creditors, who encouraged heavy borrowing as long as it was followed by heavy spending on their products. With regard to that last point, there are well documented issues with various German and French companies involved in kick-backs to Greek officials to secure hefty contracts, some of which are currently (and finally) under investigation.

The result was that Greece found itself unable to service its debt without access to international markets. The ‘troika’ of creditors, the EU Commission, the European Central Bank, and the International Monetary Fund, extended a life-line to Greece: they put down the credit required for Greece not to default on its debts, but they did so while imposing heavy conditions (the so-called ‘Memorandum’, an MoU annexed to the loan agreement). The conditions required Greece to undertake shock fiscal adjustment (a euphemism for harsh austerity) which however caused more problems than it solved. It led to GDP shrinking by a quarter over the four years of the programme, to unemployment exploding to more than a quarter of the Greek workforce (with youth unemployment at around 50%), to the debt exposure rising to over 320 billion euros, with deep cuts in many crucial sectors such as health, education, social security (but conspicuously not defence, where it seems everyone was happy for Greece to continue spending). This caused deep resentment in the Greek population, also because almost none of the bailout money found its way into the Greek economy: more than 90% of the money was simply used to service the debt, transferring the toxic exposure of German and French banks to the ECB and the Greek banks using (mainly European) taxpayers’ money. Needless to say, the latter taxpayers were not amused either (though much of their resentment seemed to be directed towards ‘lazy Greeks’ rather than the decision of their governments to use taxpayers’ money to bail out banks).

In the midst of all this, SYRIZA won the election held in Greece on 25 January 2015 on a platform of renegotiating the bailout deal, while keeping Greece in the Eurozone. The SYRIZA-led government that was formed embarked immediately on that herculean task.

In renegotiating with the creditors, the SYRIZA-led government had the option to put forward legal arguments, regarding the odiousness of the debt, the collusion of the creditors in corruption and the resulting crisis, the issue of coercion in accepting the bailout for fear of being ejected from the Eurozone, and others. However, the government opted for arguing on the basis of economics: on the basis of evidence that the bailout programme was causing such harm as to have created a humanitarian crisis in Greece, that the tough fiscal adjustment measures made no economic sense, and that the Greek economy should be allowed to come out of the double-dip recession by supporting public investment, along with much needed reforms in many areas of public life, including most prominently the issue of corruption.

The creditors would have very little of any of that: they demanded that Greece comply with its assumed obligations in full, even when it was rather evident that this made little economic sense (see for assessments here and here). While the SYRIZA-led government kept trying to negotiate its way out of the impasse, the creditors kept progressively turning off the liquity life-line provided to Greek banks (which were all but insolvent) through the ELA (the emergency liquidity assistance programme of the ECB, a programme which provided to Greek banks liquidity in euros in exchange for bonds as collateral, applying a haircut of approx. 20% and up to a cap set by the ECB). This led to SYRIZA switching from economics to politics, taking the matter to the Greek people in a referendum, to further tightening of the liquidity tap and finally to the Greek state having to impose capital controls at the end of June 2015 in order to avert an imminent collapse of the banking system. With its back now completely against the wall, the government had to request a new bailout, and it was forced to backtrack in a showdown 17-hour long negotiation in Brussels on 12/13 July 2015 under threat of being ejected from the Eurozone and facing a default coupled with a financial and banking meltdown. In so doing, it accepted some rather burdensome international obligations, including an obligation to ‘consult and agree’ with the institutions on all draft legislation (on fiscal and other relevant matters) before submitting the legislation to the Greek parliament (see the Euro Summit statement here).

III. A Right to be Free from Economic Coercion?

The harsh demands that Greece was made to accede to were widely seen as an attempt at regime change. The Twitter hashtag #ThisIsACoup was trending worldwide on the night of 12/13 July, in response to the perception that Greece was being coerced into an agreement through the threat of complete economic annihilation. And yet there does not seem to be an implication that the creditors have acted illegally in these circumstances—stupidly, perhaps, or rightly, or even (im)morally (depending on who you ask), but arguably not illegally. They were, in the first instance, merely seeking to induce Greece to comply with the obligations it had assumed (notably under a different government), and then they were simply negotiating a new agreement using as much leverage as they could muster (and they could muster a lot of that), almost crushing the country in the process.

This is because there is no right to be free from economic coercion in public international law. On the contrary, economic coercion is allowed, in the guise of both countermeasures (decentralised reactions to illegality) and sanctions (collective and centralised reactions to illegality), while the ‘sphere of freedom’ within which states are allowed to freely decide on their economic, social, and cultural system (and in which other states are not allowed to intrude) is but a relative concept: it is defined by the international obligations that each state has accepted in relation to these matters. Unless a specific obligation can be identified, which the state applying economic pressure owes to the state being pressured, and which has been violated, there is no line of defence on the basis of some fundamental right of states to be free from economic coercion. My paper provides more detail on this: it defines coercion and other cognate terms (intervention, interference, domaine réservé), it surveys the limits to (economic) countermeasures and (economic) sanctions, and determines that any ‘sphere of economic freedom’ of States is essentially a relative concept, without an irreducible core.

This may sound extremely downbeat and disappointing. But it is not. These are the possibilities and limits of positive law: if we are not to slip into naturalism (and that is a dangerous route indeed) some perspective is direly needed. Positive law does not cure the world of all its ills. In fact, it often reflects those ills, and it does so in particular when it comes to ‘fundamental rights’ of States. Any discussion of fundamental rights of States thus should not be seen as some independent legal category, but at best as an argumentative practice or as a narrative of resistance. As Vaughan Lowe has said, ‘[l]awyers have a contribution to make. They offer one way of going about resolving some of the most crucial problems that face the world. But it is only one way among many. There are many times when it is much better to call upon a politician, or a priest, or a doctor, or a plumber.’ (International Law, OUP 2007, 290, emphasis added.)

Indeed here, the way to cure the world of this ill is politics, political struggle in particular. Politics can establish fundamental rights of States as a legal category; political struggle can change the law. And the people can change politics, even if with great difficulty. But in the meantime, labouring under the illusion that the law poses some outer limit to evil in this case merely deflects our energy from where it is needed: political activism and political struggle. You want to know if there is a fundamental right of States to be free from economic coercion? There is not, unless you can identify some specific obligation that has been breached on the part of the reacting State or international organisation. This is not surprising, mind you, in a world where (casino) capitalism reigns supreme. If we want there to be a right to be free from economic coercion, we should go out and make one: perhaps this is also the main issue in the upcoming Greek election.

Filed under: EJIL Analysis, Financial Crisis, International Economic Law, States and Statehood
« Joint Blog Series: Application...
On Preventive Killing »
Comments Off on The Greek Sovereign Debt Crisis, the Right to be Free from Economic Coercion, and the Greek Election

Associate Professor of Public International Law, University of Oxford & Secretary-General of the International Law Association. Since 2017 he has been a member of the Scientific Council of the Minister of Foreign Affairs of the Hellenic Republic. Read Full
More posts by the Author »
EJIL: Live!