The Continental Shelf Delimitation Agreement Between Turkey and “TRNC”

The Continental Shelf Delimitation Agreement Between Turkey and “TRNC”

Nikolaos A. Ioannidis is a PhD candidate in Public International Law at University of Bristol.

Last month, Turkey submitted a note verbaleto the Secretary-General of the United Nations setting out the geographical coordinates of its continental shelf in the Eastern Mediterranean, as established by a delimitation agreement with the “Turkish Republic of Northern Cyprus” (“TRNC”). The agreement was signed on 21 September 2011 and ratified by the Turkish government on 29 June 2012. A map published by the Turkish Ministry of Foreign Affairs depicting the agreement is pictured below. (The reasons why the “TRNC” is in quotation marks will be elaborated below.) By transmitting this document to the UN Secretary-General, Turkey sought to achieve the publication of the agreed coordinates in the Law of the Sea Bulletin (LSB), where official submissions by states regarding the law of the sea are published. Although Turkey has not acceded the UN Law of the Sea Convention (‘LOSC’), it acted in accordance with article 84(2) LOSC (due publicity of charts or lists of geographical coordinates regarding continental shelf delimitation). Nonetheless, the submission of Turkey was not listed as an official deposit on the website of the Department of Oceans and the Law of the Sea (DOALOS). 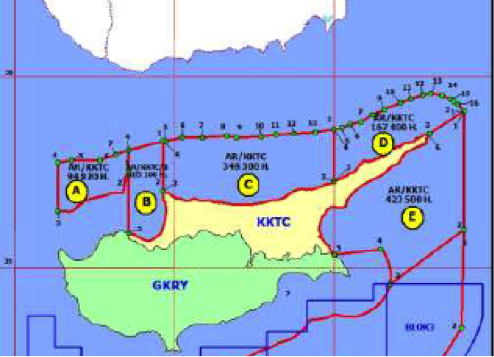 The Turkish approach on the regime of islands

The delimitation agreement outlines some of Turkey’s longstanding positions on the law of the sea. It deals only with the continental shelf and does not provide for the delineation of an exclusive economic zone (EEZ). While there is nothing precluding coastal states from choosing which maritime zones to claim and/or to delimitate, Turkey’s choice not to delimit an EEZ with the “TRNC” alludes to the Turkish position that islands in certain regions (implying the Aegean Sea) should not be entitled to claim maritime zones of their own other than territorial sea or should have reduced capacity to generate such zones. This stance was formulated in the context of the dispute between Turkey and Greece concerning sovereignty over the maritime space of the Aegean Sea;  since the 1970s, Turkey has sustained that the Aegean islands are situated on the continental shelf of Anatolia (Turkey) and, consequently, do not have a continental shelf of their own. This matter was an apple of discord between the Turkish and the Greek delegations over the course of the Third United Nations Conference on the Law of the Sea (‘UNCLOS III’). In the end, by virtue of article 121(2) LOSC, the Conference recognised the rights of islands to generate maritime zones. Article 121 LOSC reflects customary law (ICJ, Nicaragua v Colombia (2012), para 139) and, accordingly, applies to non-states parties as well.

Turkey’s resentment at the provisions on the regime of islands was one of the reasons it voted against and has not yet acceded to the LOSC (see Plenary Meetings 160 and 189). For the sake of clarity, it should be pointed out that when it comes to maritime delimitation, the maritime space an island can claim may be diminished depending on the circumstances (see, e.g., Anglo-French Arbitration 1977, Tunisia v Libya 1982, Black Sea Case 2009, Bangladesh/Myanmar 2012). Therefore, although in principle islands are not deprived of the rights bestowed on them by article 121 LOSC, they may not always be granted full effect in maritime boundary delimitations. However, islands cannot be denied their capacity to generate maritime zones and/or to be given decreased effect a priori;each case should be scrutinised according to its own unique terms. In any event, the Turkish argument that the Greek islands in the Aegean are located on the continental shelf of Turkey has been severely emaciated by the introduction of the EEZ concept and the prevalence of the “distance criterion” of maritime delimitation over the “geological” one. The distance criterion provides that the breadth of the maritime space afforded to a state should be calculated according to a fixed distance measured from the coast. The geological criterion, by contrast, would permit a state to claim the sea waters lying over the “natural prolongation” of its territory irrespective of the distance from its coastline. In the Nicaragua v Colombia case (2012), the ICJ put an end to the argument that one state’s islands cannot have their own continental shelf because they are located on another state’s continental shelf:

“The Court does not believe that any weight should be given to Nicaragua’s contention that the Colombian islands are located on “Nicaragua’s continental shelf”. It has repeatedly made clear that geological and geomorphological considerations are not relevant to the delimitation of overlapping entitlements within 200 nautical miles of the coasts of States.” (para 214).

According to its well-established position that islands should not have the capacity to claim extended maritime zones when facing a bigger coastline, Turkey holds the view that Cyprus, being an island, has lesser effect in terms of maritime delimitation than the longer Turkish coastline, which is opposite the northern coast of Cyprus. Hence, as the agreement provides, the continental shelf delineation was carried out in accordance with equitable principles, resulting in a delimitation line closer to Cyprus at some points, which gives Turkey a more extensive maritime space than that allocated to the “TRNC”. Turkey was a fervent advocate of the equitable principles/relevant circumstances method during UNCLOS III, vehemently rejecting the median line/special circumstances method (UNCLOS III, Negotiating Group 7). The “equitable principles” method, which was elaborated in the 1969 Continental Shelf cases, stipulates that all relevant factors should be considered in order to reach an equitable result; however, the Court gave no further guidance as to how such an equitable result would be reached, rendering this method equivocal.

Although the debate over these two delimitation methods was intense, the LOSC did not manage to elucidate the vagueness surrounding the law of maritime delimitation; articles 74 and 83 LOSC merely strike a balance between the two opposing sides’ assertions. Nevertheless, there has been a growing trend towards assimilation of the two methods, early signs of which are discernable in several cases before international tribunals [Anglo-French Continental Shelf Arbitration (para 148), Jan Mayen case (para 56), Qatar v Bahrain case (para 231)]. At the moment, the view supporting the integration of the two methods seems to prevail [International Tribunal on the Law of the Sea (ITLOS) Bangladesh/Myanmar case (para 238)].

Of course, the looming reconciliation of these delimitation methods does not preclude states from agreeing to designate their maritime boundaries using only one of them. In the case under consideration, though, things are not that simple. Turkey concluded an agreement with a regime established in the aftermath of the Turkish military invasion of Cyprus in 1974, which entailed use of force in violation of article 2(4) UN Charter. The “TRNC” was established in 1983 in northern Cyprus, which has been occupied by the Turkish Armed Forces since 1974. Security Council resolutions 541/1983 and 550/1984 condemned this secessionist action and reaffirmed that the sole legitimate government on the island was the Republic of Cyprus. Furthermore, the European Court of Human Rights resolved that the “TRNC” is a “puppet state” under the “effective control” of Turkey [Loizidou v Turkey, App. No. 15318/89 (18 December 1996) paras 56 and 57; Cyprus v Turkey, App. No. 25781/94 (10 May 2001) paras 77, 78 and 80; Xenides-Arestis v. Turkey, App. No. 46347/99 (22 December 2005) para 27]. Also, the ICJ confirmed the illegality of the regime established in northern Cyprus in the Kosovo Advisory Opinion(para 81). Thus, the regime in northern Cyprus is illegal and cannot claim statehood, as it is ‘a putative state emerged … with the assistance of foreign military intervention’ (James Crawford, The Creation of States in International Law, 2nd edn OUP 2006, p. 144).

Consequently, the continental shelf delimitation agreement between Turkey and the breakaway “TRNC” is not valid under international law, as the latter party is not a legitimate state entity. It thus cannot be accepted by the DOALOS as a lawful submission and be published in the LSB. As expected, the foregoing development triggered a reaction from the Republic of Cyprus and Greece, whose governments deplored the submission and deemed the agreement unacceptable. Another controversial matter to be contemplated is whether this agreement would be binding upon the Republic of Cyprus should a solution to the Cyprus Problem –which concerns the enduring occupation of northern Cyprus by the Turkish Armed Forces since 1974- be reached, given the unequal terms of the delimitation. Further, it will be interesting to see whether Turkey will be keen to conclude any maritime delimitation agreements with Greece in the Aegean Sea/Eastern Mediterranean in light of the discovery of hydrocarbon deposits therein and, if so, according to which method such delineations will be effected.

This incident illustrates the pivotal role international law can play in international relations. Turkey, a non-state party to the LOSC, realised that unless it acted in conformity with international law, the delimitation agreement would not have any legal standing. Therefore, it followed the rules set forth by the LOSC regarding the deposit of geographic coordinates of the continental shelf purporting to legitimise the agreement, even though the instrument in question cannot have any legal consequences due to the unlawfulness of the “TRNC”. Although a non-state party to the LOSC, Turkey was willing or compelled to conform to rules with which it disagrees in order to promote its interests. Moreover, this incident supports the argument that observing international law norms is the best way for states to pursue their legitimate rights. The law of the sea must be the tool for resolving disagreements on maritime affairs in the region, especially in view of the discovery of new oil and gas resources and the prospective benefits they hold for states of the region.

Nikolaos A. Ioannidis is a PhD candidate in Public International Law at University of Bristol. His doctoral thesis focuses on the application of the Law of the Sea in the Eastern Mediterranean in light of the discovery of hydrocarbon deposits in the seabed and subsoil of the region. Other fields of interest: Law of Armed Conflict, Constitutional Law, Jurisprudence. Read Full
More posts by the Author »
EJIL: Live!