The Aggression Negotiations at the ICC Review Conference

The Aggression Negotiations at the ICC Review Conference 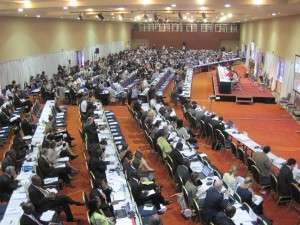 We are now in Day 7 of the Review Conference for the International Criminal Court in Kampala, with yesterday evening being a very active period in the negotiations as evidenced by the release this morning of a revised Conference Room Paper on the Crime of Aggression (CRP Rev. 2) and a proposal by Canada to complement that already made by Argentina, Brazil and Switzerland (the ABS proposal). As predicted, much of Days 5 and 6 of the Review Conference were concerned with the setting out of initial positions on the crime of aggression, with only an hour being spent on the discussion of other amendments during Day 5. A slightly revised version of the proposed amendments to article 8 were adopted with ease on Friday, at least at the working group level, subject to the discussion concerning the correct amendment procedure, but division remains as to whether or not to delete article 124 from the Statute, with the coordinators of the Working Group on Other Amendments suggesting that further informal discussions are needed before action is taken. Several questions of treaty law have also attracted interest, with the Japanese delegation reminding delegates that the Review Conference is concerned with the negotiation of amendments to an existing treaty that has its own specific requirements and not the negotiation of policy issues upon a blank canvas. The role of non-states-parties and their potential influence on the future interpretation of these amendments, if adopted, also continues to be of interest.

The meaning of consensus

Clearly, the most popular word during the opening round of the aggression discussions on Friday was “consensus” with many delegations using this opportunity to express the view that an amendment on aggression would have to be adopted by consensus, thus telegraphing to the room that they wish to avoid a vote. For those unfamiliar with international negotiations, it is important to remember that consensus does not mean that all delegations are in agreement with a text. Consensus simply means that there is no need for a vote. When a text is adopted by consensus, some states may be in agreement with a text’s content and wording, while others may not like the text, but their areas of dissatisfaction do not cross the bottom lines in their instructions from capital and thus no need to force a vote.

Several non-party states, notwithstanding their non-voting “observer” status at these negotiations, have also spoken in favour of adoption by consensus, albeit with the implication that there should be consensus within the room and not just consensus among the states parties. For some, the practice of permitting non-party states to take part in the aggression discussions over the years supports the inclusion of non-states-parties in determining the final consensus, with Russia expressly stating that it would undermine the Court, given the importance of the crime of aggression, if there was not a consensus among participants and observers at the conclusion of this Review Conference. The United States has similarly argued that proceeding by consensus is an established “decision-making principle” (Statement by Harold Hongju Koh, Legal Adviser, US Department of State, 4 June 2010).

Definition of the crime of aggression

As readers will be aware, article 5(2) of the Rome Statute indicates that the states parties need to both define the crime of aggression and set out the conditions under which the Court shall exercise jurisdiction with respect to this crime. While divergent views remain on the conditions for the exercise of jurisdiction, there appears to be a consensus, at least among states parties, on the definition of the crime of aggression. This consensus was reached in the meetings leading up to the Review Conference and is reflected by the absence of square brackets in the relevant paragraphs in the conference room paper (CRP) on the crime of aggression. The definitional aspect is found in paragraphs 1 and 2 of the proposed Article 8bis, with the wording of paragraph 2 having been borrowed from the 1974 UN General Assembly resolution on the definition of aggression, GA Res. 3314 (XXIX). Several observer states, being non-states-parties to the Rome Statute, have expressed concern with the definition, but states parties are reluctant to re-open this debate, with the current text being the product of extensive work over many years that has found acceptance among all states parties.

The use of understandings

While expressing concern with the threshold requirements and the vagaries of the word “manifest”, the United States has moved towards accepting that the conference is unlikely to re-open the definition debate and instead has pushed for the adoption of certain understandings to address its concerns. The use of understandings to be adopted by the conference is a technique also reflected in the conference room paper on the crime of aggression, versions 1 and 2, drafted by the Chair of the Working Group on the Crime of Aggression, HRH Prince Zeid of Jordan. A connection can be drawn between these understandings and article 31 of the Vienna Convention on the Law of Treaties, and more specifically the use of any subsequent agreement between the parties regarding the interpretation of a treaty or the application of its provisions, with a non-state-party encouraging such agreements.

Conditions for the exercise of jurisdiction

No-one not following the aggression discussion will be surprised to read that the room remains divided between those who favour a role for the Security Council with respect to the Court’s exercise of jurisdiction and those who argue for no role at all. This issue is reflected in the discussion of “filters” or “jurisdictional filters” and can be seen reflected in the alternatives found in brackets in paragraph 4 of proposed article 15bis.  Much has been said by delegates about the primary, but not exclusive, role for the Security Council with respect to aggression under the UN Charter, and the need for an independent court free of politicization. However, the conference room paper does suggest a sharpening of the areas of disagreement, with proposals to use either the General Assembly or the International Court of Justice as a filter being dropped. Suggestions to enhance the filter role of the Pre-trial Chamber remain in play.

The draft Report of the Working Group on the Crime of Aggression will give readers some indication of the key issues and discussions to date, although it should be noted that the Chair has opted not to “discriminate” (his words) between the views of states parties and non-states-parties. Readers may wish to comment on the effect of this absence of differentiation with respect to the source of stated concerns on the utility or impact of the report for future interpretative guidance. A copy of the report is available at: http://www.icc-cpi.int/iccdocs/asp_docs/RC2010/RC-WGCA-3-ENG.pdf

In addition to the conditions for jurisdiction, divergent views have also been expressed as to the correct amendment procedure to be used, with some favouring article 121(4) while others favour article 121(5). Clearly, the underlying issue is that of state consent and whether the consent of an alleged aggressor state should be required for the court to exercise jurisdiction over the crime of aggression. Attempts to combine the two amendment procedures have been pitched to bridge the gap between the (4) and (5) camps, as well as proposals to delay or stagger the entry into force of the aggression amendments, or parts of the aggression amendments, after adoption. Readers may wish to comment on whether this works with article 5(2) of the Rome Statute, which states that: “The Court shall exercise jurisdiction over the crime of aggression once a provision is adopted …”. Can the Review Conference adopt an aggression amendment package that provides for a delay in the exercise of jurisdiction in the face of the express words of article 5(2) that “The Court shall exercise jurisdiction”, albeit that adoption by consensus would show that such a delay would be the intention and will of the states parties?

As for article 8, a draft resolution has been adopted at the working group level and awaits confirmation by the plenary, unless a delegation wishes to reopen the debate on these proposed amendments. The areas of key concern can be found by comparing preambular paragraphs 8 and 9, with “PP9” being an attempt to address the use of dum dum bullets in hostage situations and airplane hijackings. As the divergence of views with respect to the correct amendment procedure has a knock-on effect with respect to other proposed amendments to the Rome Statute, the working group has wisely left preambular paragraph 2 of the article 8 resolution to be decided by the aggression discussions.

The removal or retention of article 124?

The third amendment topic at this Review Conference concerns article 124 of the Rome Statute, known as the “Transitional Provision”. Article 124 permits states parties to opt out of the jurisdiction of the court with respect to war crimes for seven years after the Statute’s entry into force for the state concerned. Only two states parties (Colombia and France) have made use of this provision and in the lead-up to the Review Conference, many had thought that a proposal to delete article 124 would receive a warm reception. Removal had been recommended by the preceding Assembly of States Parties (ASP).

A number of states, however, have expressed support for retaining the provision as a means to attract additional ratifications; illustrating once again the influence of the interests of non-states-parties. Article 124 is dangled as a carrot to achieve universality, with those who support retention arguing that there is nothing to lose since the provision is already in the Statute. Japan, in particular, has spoken in favour of keeping article 124 if it attracts more states parties to the Rome Statute, noting that Egypt and other non-states-parties within NAM want article 124 retained. The non-party states of China, Malaysia and the Philippines have also spoken in favour of retention, while Amnesty International is lobbying for deletion, viewing article 124 as an “impunity provision” and having opposed the provision’s inclusion since the Rome negotiations in 1998. Seeing no clear consensus in favour of removal or retention, the co-chairs of the Working Group on Other Amendments have asked for delegations to continue discussing this issue informally.

Meanwhile, in the local news …

Delegates can rest easy, although most are likely unaware given the bubble-like conditions of the Review Conference location, that a local newspaper has reported that the “killer hippo” that has been “terrorising residents” in the Munyonyo area (where the conference is being held) has been killed by the Uganda Wildlife Authority, but sadly not without the loss of two fishermen and a farmer’s cow.

Financial support for our coverage of the 2010 Review Conference was provided by the Social Sciences and Humanities Research Council of Canada.

Dr Joanna Harrington is a professor with the Faculty of Law at the University of Alberta in Canada. Read Full
More posts by the Author »
EJIL: Live!