So, Has This Ever Happened Before?

So, Has This Ever Happened Before?

For the past week or so I’ve been enjoying the start of my sabbatical in New York, as a visiting professor at Columbia this semester. And for the past couple of days I’ve been enjoying – well, experiencing – the chaotic collapse of parts of the city during the UN General Assembly. And today I could enjoy – well, behold – the spectacle of the President of the United States threatening another UN member state with nuclear destruction at the podium of the General Assembly: 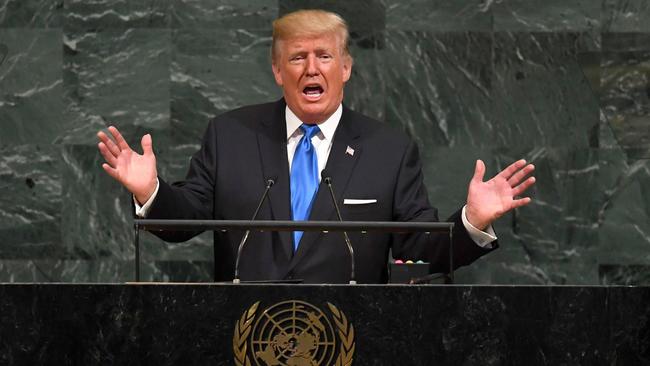 If this is not twisted enough, now North Korea’s reckless pursuit of nuclear weapons and ballistic missiles threatens the entire world with unthinkable loss of human life.

It is an outrage that some nations would not only trade with such a regime, but would arm, supply, and financially support a country that imperils the world with nuclear conflict. No nation on earth has an interest in seeing this band of criminals arm itself with nuclear weapons and missiles.

The United States has great strength and patience, but if it is forced to defend itself or its allies, we will have no choice but to totally destroy North Korea. Rocket Man is on a suicide mission for himself and for his regime. The United States is ready, willing and able, but hopefully this will not be necessary. That’s what the United Nations is all about; that’s what the United Nations is for. Let’s see how they do.

Note the nature of the threat – if the US is forced to defend itself or its allies, it will totally destroy North Korea (not – react to the extent necessary and proportionate; presumably even a preemptive self-defense theory would be on the table). Note also how the United Nations is a ‘they’ rather than a ‘we.’  Question for the readers: has this ever happened before? Shoes have been banged at that podium, of course, and sulfur has been smelt. Yet even at the height of the Cold War, has a head of state of a nuclear-weapons state used this kind of directly threatening language? Or is this simply old-fashioned nuclear deterrence inartfully expressed?