Legitimate Targets?: A Reply to Jutta Brunnée and Geoff Corn

Legitimate Targets?: A Reply to Jutta Brunnée and Geoff Corn 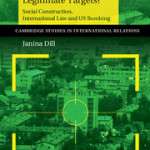 I would like to start by thanking Jutta and Geoffrey for their detailed and very thoughtful comments. I am particularly glad that Geoffrey focused on my interpretation of IHL, bringing to bear his military expertise and that Jutta focused on the theoretical part of the book, which is inspired by her own interactional theory of international law (IL), developed with Stephen Toope. As their comments cover different terrains I will begin by addressing three criticisms contained in Geoffrey’s remarks and then separately engage with Jutta’s discussion of the book.

Geoffrey disagrees with my representation of the role and substance of the principle of proportionality. I should clarify that I agree with Geoffrey’s observation that the principle is not necessarily central to many practitioner’s understanding of legitimate targeting. When I emphasize the principle’s importance, I mean its central place in the ‘architecture’ of IHL. It repeats the very purpose of law to somehow accommodate the regularly opposed imperatives of protecting human life and of allowing belligerents to follow military necessity. In theory, how proportionality is interpreted chiefly determines how much civilian protection and belligerents’ freedom of action respectively IHL affords. In practice, it is rarely mentioned without reference to precautions in attack, as Geoffrey points out, and it is often misunderstood.

Geoffrey also questions my representation of the principle’s substance as asking for something akin to a balance between the anticipated military advantage and expected civilian harm. He states that practitioners rather than seeking such a balance ‘understand that where civilian risk cannot be justified by genuine military interests … there is no utility in the use of combat power’. Though very important, I believe this is not a proportionality judgment, but one of necessity. Civilian harm that cannot be justified by military interests is unnecessary, but civilian harm that can be justified by military interests, even if it is also necessary for the pursuit of those interests, is not therefore proportionate. The collateral damage expected to be caused by an attack on a military objective even if that damage cannot be avoided – hence when the expected civilian harm is necessary for the achievement of the anticipated military advantage – may still be disproportionate.

With proportionality the law imposes an obligation on belligerents in addition to the maximum possible minimization of civilian casualties. That means law will sometimes demand that a belligerent forgoes a militarily valuable attack that would not have caused more than the absolutely necessary collateral damage. In combination with the fact that the notion of a balance between military gain and loss of human life is a conceptual conundrum and somewhat odious this may explain why practitioners focus on precautions and the minimization of collateral damage rather than on the question whether the harm that an attack cannot at the end of the day avoid causing is proportionate. The obligation to do just the latter, i.e. establish the commensurability or proportionality strictu sensu of an attack, however is the very essence and added value of the principle.

Geoffrey’s second point of critique is that I do not fully account for how the increased recourse to law in decision-making in the US military ‘reflects a genuine interest in advancing IHL’s ultimate objective of mitigating civilian risk.’ In order to shed light on the intellectual and motivational process underlying decision-making in war I relied on interviews with members of the US Air Force deployed in recent wars. One recurring theme was that IHL sometimes works permissively, in the sense that the purported legality of a target assuages conscientious decision-makers’ moral or political qualms about the potential consequences of an attack. The relationship between input of law into military decision-making and mitigation of risk to civilians is thus not linear. I agree with Geoffrey that many military decision-makers in the US look towards the law in good faith for guidance in a difficult task, but recourse to IHL can have a variety of motives: besides lending legitimacy to morally or politically dubious choices, it may be a means to impose reputational costs on the adversary or manipulate public opinion. The particulars of the case notwithstanding, I believe that just as we cannot equate recourse to law with protection of civilians we cannot assume it always reflects a motivation to promote the latter.

Finally Geoffrey asserts that I fail to discuss the implications of the book’s findings, specifically how we should respond to the divergence between public expectations of legitimate state conduct and conduct permitted by IHL or indeed to the divergence between legally permitted and morally justified conduct. Geoffrey is completely right: A discussion of those implications will need the space to navigate between the devil of realism – the kind that denies the applicability of norms in war altogether – and the deep blue sea of pacifism. The prescriptive conclusion we can more easily draw from the book’s findings is that legality should not be the be-and-end all of a normative conversation about war. Law is crucially important and the mantle of legitimacy afforded by legality may help mitigate the reputational costs of waging war, but in the 21st century it will not ward off those costs and the attending political fallout. Even more importantly, democratic societies that ask some of their members to fight on their behalf need to engage with the thought that legality may not in the end fully protect those men and women from public opprobrium or moral doubt. That is not to suggest that every soldier in every war commits moral wrong. Harm done to civilians in a genuinely defensive and necessary war may in the end be justified as the lesser evil. It is just not the case that harm done in war permitted by law is reliably or for that reason morally justified or perceived as legitimate.

Jutta raises a whole host of insightful questions about the theoretical part of the book. I will focus on two major points of her critique, which I believe are related. First she argues that the proposed theory is lacking ‘a convincing account of legality’ because it focuses on the compromise character of law as its distinguishing feature though not all laws necessarily reflect such a compromise. Second, Jutta holds that the singular focus of the book on IHL is not a sufficient test of the theory because, contrary to my assertion, IHL is an easy case for the theory.

I accept Jutta’s criticism that the book could have devoted more space to characteristics of norms associated with legality or the rule of law. As she points out, they after all play a crucial role in allowing IL to be behaviourally relevant. Clarity, predictability, consistency and public availability are closely related to determinacy and through it to both the action guidance and justiciability that a legal rule affords. However, I want to maintain that a rule of IL that happens to meet these criteria only partially or not at all is still law, just ‘bad’ law. Although such a law is less likely to be normatively successful and indeterminacy does affect behavioural relevance, ‘bad law’ can make a difference for behavior by mediating between an actor’s perceived interests and normative beliefs. In turn, a law that meets these criteria perfectly may not make a counterfactual difference given how the actor who recurs to law perceives her interests and normative beliefs. If an actor does not perceive a conflict between immediate situational imperatives and her abstract commitments, then for her norms and interests converge. If they converge where law draws the compromise than her recurring to law makes no counterfactual difference.

Contingent determinacy and the above mentioned rule of law requirements play a role in how effective IL is, but their presence neither grounds the ability of IL to make a difference nor does their absence prevent it. On the other hand, the perceived compromise character of law is the key to how recurrence to IL makes a difference. As Jutta suggests, a lot of IL expresses what many of us perceive to be extremely lopsided compromises between interests and norms. But it is partly because we expect law to propose such a compromise and we create treaty law to that end in areas of international relations where we need a compromise between what many actors would perceive as immediate situational imperatives and abstract long-term commitments that it is unlikely that there is a law that has compromise character to no one. Customary law, on the other hand, only emerges if according to the perception of a critical mass of actors, interests and normative beliefs converge, dispensing with the need for a compromise.

Is IHL a hard case? I initially introduce war as a hard case for IL to make a difference because we tend to think of war as the realm of international relations in which states are most ready to throw overboard normative commitments and act for purely instrumental reasons. However, this is not why I think IHL is, in one sense at least, a hard case for the theory to hold. The aspect of the proposed theory concerned with IL’s behavioral relevance suggests that IL can make a counterfactual difference for behavior because its justiciability and action guidance have an intellectual and motivational effect. Jutta’s comment succinctly summarizes this proposition. IHL is a hard case for testing it because IHL is, in the terms of the proposed theory, bad IL: Its action guidance and justiciability are reduced by the high degree of indeterminacy of the rules under investigation. Nonetheless, interviews reveal the motivational and intellectual effects to be at work and show how they partly account for how US air targeting develops over the period investigated. If a body of IL so far away from the ideal type of IL can make a difference for behavior based on the two mechanisms proposed, we may have reason to believe that more determinate bodies of IL can likewise make a difference when they are recurred to.

Jutta is of course right that some aspects of war and hence of IHL make my task in the book easier. The fact that we can generalize that immediate military imperatives often contradict the need to protect human life makes war an easy case for finding the empirical equivalents to interests and norms as I conceptualize them. War is also an easy case in the sense that the independent variable of the theory, input of IL into decision-making, varies so radically: In the space of only a few decades the IHL rises from irrelevance to omnipresence in US command centers. While I do not have reason to believe that the intellectual and motivational effects are not at work in other areas of IL, I certainly agree that it would need to be separately demonstrated. Doing so may be harder given the more fluid nature of interests and norms in other areas of international relations and the less radical rise to prominence of other bodies of IL.

Janina Dill is an Assistant Professor at the Department of International Relations of the London School of Economics and a Research Associate of the Oxford Institute for Ethics, Law and Armed Conflict at the University of Oxford. Read Full
More posts by the Author »
EJIL: Live!