Patrick Robinson of Jamaica Elected to the ICJ

Patrick Robinson of Jamaica Elected to the ICJ 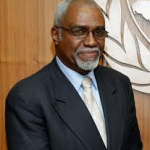 Last week, I wrote about the elections held last Monday, by the United Nations General Assembly and Security Council, to fill 5 upcoming vacancies on the International Court of Justice  As I reported, both bodies were able to agree on the election of four judges, but were unable to agree on the filling of the fifth vacancy. In several rounds of balloting over two days, Patrick Robinson from Jamaica (currently a Judge and former President of the International Criminal Tribunal for the former Yugoslavia) consistently received a majority in the General Assembly However, it was Susana Ruiz Cerutti, the current Legal Adviser to the Ministry of Foreign Affairs of Argentina and former Foreign Minister of that country, who obtained a majority in the Security Council. On Tuesday last week, as noted by Ambassador (and Professor)Kriangsak Kittichaisaree in his comments to my previous post , Argentina withdrew the candidacy of Susana Ruiz Cerutti.

Yesterday, the General Assembly and the Security Council, again meeting separately but concurrently, elected Patrick Robinson as Judge of the ICJ. He obtained all 15 votes in the Security Council and 185 votes in the General Assembly. As previously noted by Ambassador Kittichaisaree in his comments to my previous post , the election of Judge Robinson means that 4 out of the 5 judges elected or reelected to the ICJ, in this election cycle, are or were members of the International Law Commission. By my calculation practically half of the judges of the ICJ (in its new composition starting in February 2015) will have been members off the ILC prior to election to the ICJ.  Judge Robinson’s elections also adds to the growing number of ICJ judges with prior international judicial experience – a trend that I noted three years ago (here and here).