Once upon a time there was a gap … (repeat)

Once upon a time there was a gap … (repeat)

Editor’s Note: This is another repeat post of an old favourite. The piece was first posted in December 2010. Roger O’Keefe is Deputy Director, Lauterpacht Centre; University Senior Lecturer in Law, University of Cambridge and Fellow & College Lecturer in Law, Magdalene College, Cambridge.

Once upon a time/Es war einmal/Il y avait une fois/C’era una volta, way back at the end of the Cold War, the Comptroller-General for the Complete System was performing his quarterly ‘stress test’ on the normative integrity of the international legal system when he detected a gap.  At first he did not believe it.  He had been taught, and throughout his professional life had encountered nothing which caused him to doubt, that such a thing was impossible.  The combination of the Lotus principle and the residual negative always provided an answer in extremis.  But the gap he was dealing with here was not that sort of gap.  Nor was it, as most supposed gaps are, merely a question of international law the answer to which is not to the interlocutor’s liking.  Here was a real gap, and an existential gap at that.  The Comptroller-General for the Complete System was perplexed.  I need some help with this, he thought.

Within a week, news of the gap was the subject of fevered speculation across the globe in faculties of law, ministries of foreign affairs, intergovernmental and non-governmental organisations and the boardrooms of multinational corporations.  From the ends of the earth, international lawyers—academics and practitioners, positivists and naturalists, doctrinal exegetes and critical theorists—gathered to discuss the unnerving development.

The first to offer an opinion were the legal advisors to the US Department of State and the multinational corporations—respectively, one should add, although it was sometimes hard to tell the difference.  To them the source and nature of the gap was obvious: it was the hole left in the international legal order by the conceptual bankruptcy of statism, a space rich in possibilities which individual and market freedoms were expanding to fill.  Having no need to hear the opinions of others, and time being money, these legal advisors then went back, perhaps not quite respectively, to drafting bilateral investment treaties.  The parole passed from the legal advisers to the various European governments, who characterised the gap as the hole left in the international legal order by the welcome collapse of anti-liberal humanist tyranny, a space rich in possibilities for the construction of a new Europe.  A spontaneous chorus of Beethoven’s Ninth rang out from Lon- … well, Paris to Berlin.  (In Warsaw, Prague and Budapest they were too busy buying colour TVs, while in Sofia, Minsk and Kiev they were standing around waiting for Beethoven’s rehabilitation.)

Next to speak were the theorists.  Some of these read the gap as the silhouette of the Other.  A few of the women present, whom everyone had ignored until now, discerned in the shape of the gap an unmistakable phallus.  Queer theorists cheekily took to calling the gap the ‘glory hole’.  For his part, a kindly English gentleman, who, people whispered scarcely credibly, had worked for many years for the Foreign Office, divined in the gap the first breach in Vattelian international law opened up by a new self-constituting society of all societies.  A bespectacled, boyish Finn thought the gap looked kitsch.

But none of these accounts captured the true character of the gap, which, as the Comptroller-General for the Complete System had rightly apprehended, was more essential.  Consternation increased.  The kindly English gentleman tried to sooth raw nerves by reading to everyone from his latest novel, but this only deepened the air of anxious bewilderment.  Things began to get fractious.  The hole was getting a name for itself, but no-one could agree on what that name was.

The matter was eventually referred to the United Nations General Assembly, which invited the aforementioned ILC to begin work on the topic of ‘Gaps and Silences in the Law’.  The ILC accepted the invitation with relish—or Dijon mustard, to be precise, since it elected as Special Rapporteur for Gaps and Silences in the Law a mercurial Frenchman, who, in his eleventh report, turned to the preliminary questions of terminology and taxonomy.  There were numerous types of gap, he reported, all going by a different name.  Alternatively, one might say that there were numerous names for the same type of gap.  This prefatory ontological question called for several reports in its own right, to which the Special Rapporteur would in time proceed; but, acutely aware as he was of the urgency of the subject, he would in his present report offer the Commission a provisional list of denominations, which should not be taken to imply any decision as to whether these denominations represented different types of gaps or different names for the one type of gap.  These denominations, in no particular order, were as follows:

the last being a French word which, while often rendered into English as ‘hole’, carried a nuance lost in translation.  In turn, the genus trou was divided into two species, the ‘apparent trou’ and the ‘true trou’.  Despite the best efforts of the mercurial Frenchman, however, the gap, which he provisionally believed to be a trou, although whether apparent or true was unclear, came universally to be referred to, in English, as ‘the hole’.  Even more frustratingly for the Special Rapporteur, at some stage in the course of the labours of the ILC’s secretariat, the Chinese translation of ‘trou’ was retranslated into French as ‘espace juridique’, sowing the seeds of confusion for the next decade.

The General Assembly, despairing of seeing the completion of the ILC’s study, turned instead to the International Court of Justice, seeking from it an advisory opinion on the hole.  Four years later, in Legal Consequences of the Detection of a Hole by the Preoccupied Juridical Community, the ICJ, tentatively characterising the hole as an apparent trou, advised that this trou was a self-contained regime of no consequence to the international legal system as a whole (the choice of the last word causing problems for the interpreters when the judgment was delivered).  The Court added, however, that ‘in view of the present state of international law viewed as a whole … and of the elements of fact at its disposal, [it] [was] led to observe that it [could] not reach a definitive conclusion as to what would transpire in the event that the hole were a true trou’.

On being informed of the Court’s non liquet, the Comptroller-General for the Complete System signed off sick.

The international criminal lawyers now sprang into action, fearing the dreaded ‘impunity gap’, the source of the world’s ills from Srebrenica to the British pronunciation of the word ‘yoghurt’.  The United Nations Security Council, determining that the hole constituted a threat to international peace and security and acting under Chapter VII of the Charter, established an ad hoc International Tribunal for Criminal Holes and Yoghurt (ITCHY).  The Tribunal’s Pre-Pre-Trial Chamber swiftly handed down a one-word interlocutory decision on the hole.  Within a fortnight, 545 articles, 37 commentaries and 14 monographs had been written and 8 new journals founded, all of them dedicated to analysing what the Tribunal had said.  With some embarrassment, it was soon revealed that what had been mistaken by the stenographic intern, an over-eager American JD student, as a single-word judgment had in fact been one of the judges clearing her throat.  A further 962 articles, 53 commentaries and 24 monographs hit the shelves, a blog dedicated to judicial phlegm was launched, and a Facebook tribute page in honour of the American JD student attracted over a million hits as well as a stern rebuke from the president of the Appeals Chamber.

The whole situation eventually became intolerable when a coalition of states sought to bolster the legal justification for their unilateral invasion of another state by reference to the indeterminacy of international law as manifest in the hole.  In response, the UN Secretary-General established an independent expert group comprising half a dozen impartial private practitioners, whose task it was to get to the bottom of the hole, metaphorically speaking.  As the practitioners’ contracts with the UN stipulated payment by the word, the Organisation had enough money for only a two-page report, rendered pictorially.  As it turned out, the expert group was divided over the contours of the gap.  The idealists pictured the gap like this: 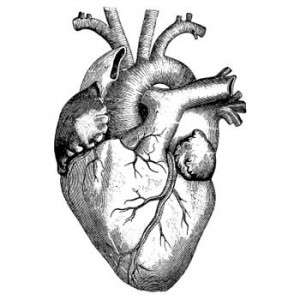 Since the practitioners would not utter a word unless they were paid for it, it was left to the assembled throng of international lawyers to interpret the diagrams for themselves.

After much debate, a consensus eventually emerged.  The report indicated that at the centre of international law lies a space which the human heart is needed to fill.  International law, the pictures said, has no heart of its own; rather, it is no more, but no less, than a vehicle for human values, a language of human self-ordering, a particular praxis of human willing.

In construing the report thus, some placed the emphasis—a little banally, but no less accurately for that—on how international law becomes a site for the projection of personal and institutional desires and ambitions.

Others stressed—whether any more profoundly is for the listener to judge—the incapacity of international law to secure human flourishing without first a revolution of the human heart.  To this second school of thought the report seemed to say that if international law is inadequate, look for its improvement to the inadequacy of humankind: ‘lie down’, in the words of Yeats, ‘where all the ladders start/In the foul rag-and-bone shop of the heart’.

To others still, the report expressed both of these insights.  In a clandestine communication smuggled out of his prison cell on Devil’s Island, Joseph Weiler reminded everyone, as ‘Talmud long ago taught us’, ‘that even contradictory conclusions can both be the living word of God’.

The moral of the tale of the gap—or was it a hole?—is best left to the mercurial Frenchman, the ILC’s Special Rapporteur on Gaps and Silences in the Law, and to his thirty-second report, which provisionally concludes that while there may or may not be gaps in international law, there are never silences.  International lawyers cannot shut up.  This can be a good thing, the Special Rapporteur opines, since ideas need the threshing and winnowing of informed debate.  In other ways, he equally cautions, the logorrhoea of international lawyers is less salutary.  Silence, the handmaiden of reflection, can be golden.

As for the Comptroller-General of the Complete System, he retired in 2010.  As a token of esteem, he was named Poet in Residence at the European Journal of International Law, and, as the Spanish say, he lived happily and ate partridge.  His old job, meanwhile, was privatised and outsourced to a normative services company in India staffed by PhDs from MIT and CalTech.  But that is another story.

Filed under: EJIL Analysis
« New Discussions on UN Human Ri...
Reminder: ESIL in Valencia »
Comments Off on Once upon a time there was a gap … (repeat)