Objectivism and Managerialism in the Law of Statehood: the Tradition Renewed by Vidmar’s Democratic Statehood

Objectivism and Managerialism in the Law of Statehood: the Tradition Renewed by Vidmar’s Democratic Statehood 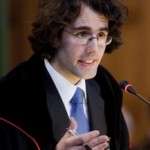 It is against this backdrop that the following observations will seek to situate the impressive and refined work of Jure Vidmar, whose subtle insights on the matter had been trickling in the literature these last years through an impressive number of articles. They now receive their full thrust with the publication of his first monograph entitled Democratic Statehood in International Law: The Emergence of New States in Post-Cold War Practice (Hart, 2013).

The following observations are consciously made very cursory. They are more fully developed in a forthcoming article entitled The International Law of Statehood: Craftsmanship for the Elucidation and Regulation of Birth in the International Society.

1. The Regulatory, Explanatory and Epistemological Projects behind Democratic Statehood

The remarkable work of Jure Vidmar epitomizes these regulatory, explanatory and epistemological moves in the legal scholarship. His work pursues explanatory ambitions because it seeks to “answer questions ‘which the law of statehood in its present state cannot answer exhaustively’ (p. 11). It rests on a regulatory and managerial project because it seeks to make state-creation a “law-governed political process” (p. 10). It is an epistemological project because it seeks to rehabilitate the knowledge on the law of statehood by “updating” it (p. 11). Jure Vidmar’s Democratic Statehood performs these three tasks with the help of one tool: proceduralization. The sophisticated proceduralization that lies at the heart of his work can be seen as serving these three agendas at the same time.

Jure Vidmar’s proceduralization is instrumental in the performance of explanatory functions by the law of statehood. Indeed, it is unquestionable that procedures can be more easily apprehended than eclectic and multi-layered processes whose intricacies are more difficult to cognize. For international lawyers, procedures constitute a way to make sense of complex processes by constraining them within formal walls. Because of its unparalleled explanatory virtues, proceduralization like that put forward by Jure Vidmar, is not unprecedented. The literature on the international law of statehood comes with many examples of attempts to proceduralize state-creation. Another good example thereof is the proceduralization inherent in the right of self-determination whereby the exercise of that right must follow certain procedural patterns. Proceduralization is also found in the vast literature dedicated to collective recognition processes and collective creations of states.

Jure Vidmar’s proceduralization is a regulatory and managerial tool for state creation which, once elevated into a procedure, lends itself more easily to regulation. For instance, once proceduralized, state creation can be subjected to democratization. As a regulatory project, the proceduralization found in Democratic Statehood is reminiscent of the reading of creation of states – and especially of secessions processes – as being a formal procedure that can be null or invalid, for instance because they are considered in violation of some peremptory norms. Consequently it provides a great sense of control on the process of disintegration of states. Many such constructions were heard during the controversy shrouding the process, which eventually led to the Kosovo advisory opinion delivered by the International Court of Justice.

Jure Vidmar’s proceduralization finally performs an epistemological function because it allows the rehabilitation of the law of statehood and that of the group of professionals organized around it. It particularly preserves the relevance of that area of knowledge while simultaneously empowering international lawyers whom it allows to profile themselves as experts of such “law-governed processes”, simultaneously offering them the opportunity to claim some ascendency on other experts on international affairs.

2. Situating the Work of Jure Vidmar in the Scholarship on the Law of Statehood: Legalism and Objectivism

The legalist premise of Democratic Statehood is not controversial. Indeed, there seems to be a wider consensus in contemporary literature on statehood, asserting that state creation is a factual process but that the state itself is a legal construct. The state is accordingly seen as having first emerged as a social reality before being apprehended by the law. There certainly is some merit in one particular aspect of this conciliatory approach. Indeed, it seems difficult to deny that apprehension of a fact by the law necessarily entails a legal construction. Said differently, capturing a fact boils down to reconstructing it in legal terms. There cannot be an apprehension without a legal construction. Recognizing the virtue of this conciliatory approach does not mean, however, that such a scholarly consensus is exempt of fundamental epistemological flaws, not least because facts themselves do not exist independently of any normative framework through which they are constructed.

The objectivist dimension of Jure Vidmar’s work is less obvious, for it starts from an inter-subjectivist perspective. Indeed, Jure Vidmar acknowledges the inter-subjective processes behind the emergence of new states, especially in situations of secession and takes a very critical look at the mainstream construction of the Montevideo criteria. For instance, Jure Vidmar writes: “[r]ecourse to the statehood criteria, traditional or additional, is not enough to answer whether or not an entity is a state” (p.63). He adds: “[t]he emergence of a new state is … not a matter of declaration of independence, but rather a matter of acceptance of such a declaration” (p. 63). According to him, such an acceptance can take several forms: consent by the parent state, dissolution of the parent state, internationalized action and ‘constitutive recognition’.

Yet, after coming to terms with inter-subjective processes and the illusive character of the Montevideo criteria, Jure Vidmar returns to the idea that the status of state can be objectively created within the legal system. He argues that “state creation is an internationalized law-governed process of overcoming an applicable counterclaim to territorial integrity” (p. 10). He indicates: “[t]he process prescribes certain democratic procedures and may even result in the international imposition of democratic institutions” (p. 10). For him, “the emergence of a new state is not a factual occurrence but a law-governed political process which leads to a change in the legal status of a certain territory. Under international law, this process requires some democratic procedures to be followed” (p. 10).

In the view of the author of this review, the turn to objectivism is thus only postponed for a little while. If this reading of Democratic Statehood can be upheld, Jure Vidmar thus takes his place in the dominant objectivist school within the law of statehood. There is no doubt that most of the scholars and experts interested in the legal aspects of state creation believe that once statehood has been captured by international law, it becomes an objective and universally opposable data within the whole international legal system. For them, once a State has penetrated the international legal system it becomes opposable to all parts of that system and to all stakeholders. In that sense a State captured by international law is objectivized by the latter. Jure Vidmar’s turn to proceduralization, albeit providing a temporary respite, perpetuates this methodological move.

With this book, an established scholar elegantly wraps a decade of research on state creation. Whether this book concludes his work on the question and heralds a move to new areas of research or whether this monograph is only the first (colossal) stone of a future mountainous oeuvre is a matter for his author to decide. Nonetheless, there is no doubt that the refreshing insights presented in Democratic Statehood, because they cement the managerialism and objectivism informing the existing scholarship on the question, suffice to give the work of Jure Vidmar a prominent place in the tradition of the law of statehood.

Filed under: EJIL Book Discussion, States and Statehood
« The Importance of Legal Criter...
Democratic Statehood in Intern... »
Comments Off on Objectivism and Managerialism in the Law of Statehood: the Tradition Renewed by Vidmar’s Democratic Statehood