Goal-setting in an era of mass extinction: a planetary boundary for biosphere integrity in international biodiversity law? (Part II)

Goal-setting in an era of mass extinction: a planetary boundary for biosphere integrity in international biodiversity law? (Part II)

The potential role of the planetary boundary for biosphere integrity

The planetary boundary framework was originally developed to identify the key global processes that are essential for regulating the functioning of the Earth System and create what are effectively safe ‘buffer zones’ that might prevent humanity from crossing dangerous biophysical thresholds or tipping points. In its current version, the framework describes nine such boundaries, ranging from climate change to atmospheric aerosol loading and including freshwater use, land-use change, stratospheric ozone depletion, introduction of novel entities to the environment, ocean acidification, biogeochemical flows and, crucially, biosphere integrity. The fact that the boundaries represent the limits of what the authors call the ‘safe operating space’ for human development on a changing planet has attracted immediate interest from political scientists working on Earth System governance, and some legal scholars have progressively started to consider the concept as potentially useful for international environmental law as well.

Ever since the first elaboration of the nine planetary boundaries, the very possibility of identifying a global boundary for biosphere integrity resulting from changes in regional and local biodiversity has appeared as one of the most contentious aspects of the framework. As a result of intensive discussions to which various research communities contributed, the description contained in the original planetary boundaries paper was in fact updated in 2015,in order to capture the two key roles of the biosphere in the Earth System, and namely: (a) the importance of genetic diversity in maintaining and building its resilience (i.e. through the use of global extinction rates); and (b) the contribution of organisms’ functional traits to Earth System functioning (i.e. through the so-called Biodiversity Intactness Index). In doing so, the planetary boundary framework was also expanded to recognize the importance of sub-global boundaries that must align with the global boundary definition for biosphere integrity, owing to the fact that the ideal unit of analysis for changes in elements of biodiversity is usually situated at the level of biomes and ecosystems.

From this perspective, and subject to further scientific advancements and new data becoming available, a planetary boundary for biosphere integrity could potentially represent a very useful tool for international biodiversity law. On the one hand, because the national allocation of the planetary ‘safe operating space’ would recognize and make explicit the above-mentioned link between a global boundary and the regional, national and sub-national operating scales at which biodiversity loss occurs. On the other, and as a consequence, because the incorporation in international biodiversity law of a global boundary that might be quantifiable through critical values for one or more control variables could in theory enable changes to biosphere integrity to be used as an indicator of State responsibility, providing a powerful empirical benchmark against which to assess the respect of legal obligations relating to biodiversity (or, at the very least, a set of more precise, science-based objectives and targets that it would be more difficult for States to ignore).

The nine planetary boundaries and the status of their control variables. Source: Steffen et al. (2015) 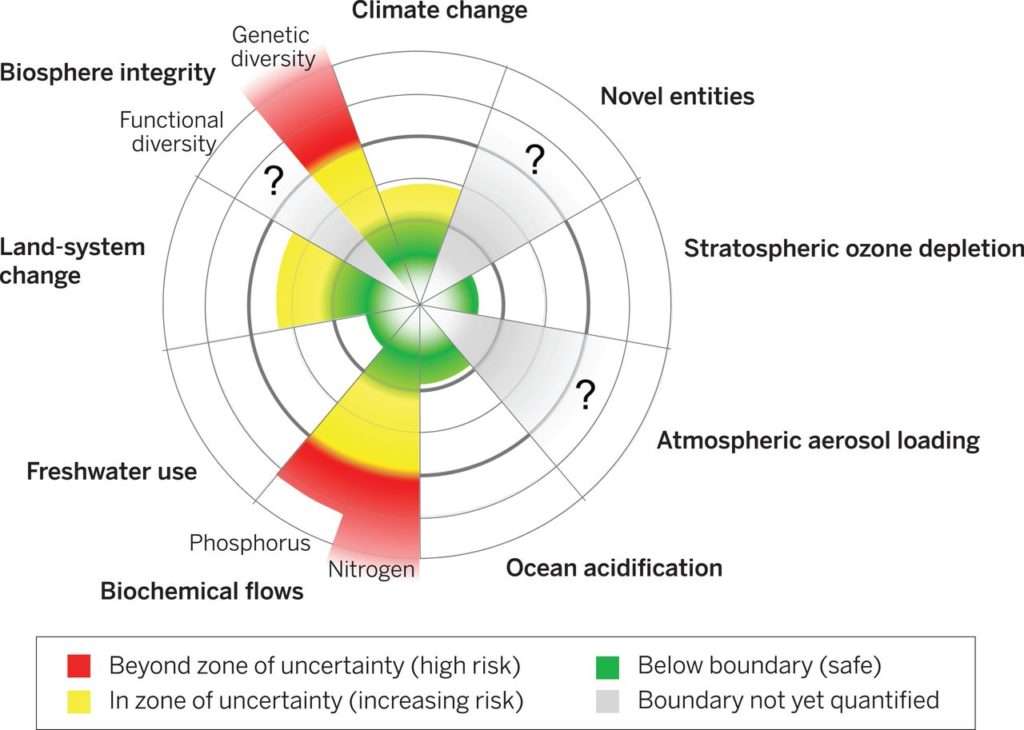 For the purpose of the present analysis, it is less important what the control variables should be, and it should indeed be noted that identifying suitable ones for biosphere integrity remains a daunting and still hotly debated task. What is crucial is that the concept of a measurable planetary boundary for biosphere integrity clearly suggests that the related biophysical limits, once incorporated in international law, could play an important role in mitigating the procedural and/or non-enforceable nature of most international obligations relating to biodiversity within national jurisdiction (for example, the requirement to develop national strategies, plans or programmes for the conservation and sustainable use of biodiversity set in Article 6(a) of the CBD, or the obligations for in-situ conservation listed in Article 8).

Looking ahead: entry points for the planetary boundary for biosphere integrity in international law

What are some of the innovations that could help international biodiversity law harness the normative potential of the planetary boundary for biosphere integrity? A preliminary analysis would suggest at least four, non-mutually exclusive developments. Each of them comes with potential pitfalls or caveats and none of it is a silver bullet in itself. At the same time, it could be argued that they represent important entry points for a biosphere integrity boundary to be effectively incorporated in international law.

As a first step, it would be important to strengthen the science-policy interface of the IPBES, byincreasing its collaboration with the cluster of biodiversity-related MEAs (and particularly with the CBD). Such collaboration is already provided for in the so-called 2010 Busan Outcome, and it would essentially consist in a more systematic approach by such MEAs to submitting requests to IPBES, something which could in turn facilitate their implementation and contribute to the diffusion of a common knowledge and framing of the issues at stake. From this perspective, a greater IPBES involvement could be instrumental for two reasons. First, because strengthening the knowledge about the relationship between biodiversity and the provision of key ecosystem services is a prerequisite of any discussion about the potential use of the planetary boundary framework as a tool for law- and policy-making. Second, because the Panel, owing to an explicit mandate that allows it to gather knowledge about biodiversity at different spatial scales, could be in the unique position to assist the biodiversity cluster in the definition of both a global, science-based target for biosphere integrity and the national-level biodiversity targets that are meant to support its implementation.

A second, potential line of action falls within the emphasis recently put by authors Rakhyun E. Kim and Klaus Bosselmann on the identification of an emerging general principle of law concerned with the protection of ecological integrity. So far, the concept of ecological integrity has been referenced, either in preambles or in operative clauses, in more than a dozen MEAs and a number of key soft law instruments, even if never explicitly defined. Perhaps crucially, the current draft version of the Global Pact for the Environment also refers to the need to maintain ecological integrity as the essential component of a ‘duty to take of the environment’ (Article 2), stating that ‘everyone contributes at their own levels to the conservation, protection and restoration of the integrity of the Earth’s ecosystem.’ Linking a general principle of ecological integrity with the planetary boundary framework would therefore mean allowing it to be interpreted as expressing an obligation to maintain the functioning and resilience of ecosystems within national jurisdiction at a level compatible with the respect of a global boundary for biosphere integrity, consistent with the principle of common but differentiated responsibilities. From this perspective, we have recently seen, with the judgment of the International Court of Justice in Costa Rica v Nicaragua, that there is increasing attention towards the use of non-legal techniques, such as ecosystem service valuation, when deciding compensation for environmental harm or interpreting existing legal concepts. Research on the planetary boundary for biosphere integrity could greatly speed up the process.

Third, it would be important to expand legal obligations linked to concepts that are somewhat more established in international law, for example the ecosystem approach that has been described by Elisa Morgera as the ‘landmark regulatory strategy of the CBD and other biodiversity-related Conventions’. In its basic formulation, the ecosystem approach is defined by the CBD as a ‘strategy for the integrated management of land, water and living resources that promotes the conservation and sustainable use of biodiversity in an equitable way’. Through an extensive use of guidelines and soft-law instruments, the Convention has then clarified that a key element of the approach consists in the importance of maintaining the complex web of processes that determine the integrity and productivity of ecosystems (for example, Principle 6 of the CBD Principles on the Ecosystem Approach specifies that ‘ecosystem must be maintained within the limits of their functioning’). As a consequence, using the planetary boundary framework to inform the normative implications of the ecosystem approach would be one of the more direct ways to specify substantive obligations applicable to biodiversity within national jurisdiction, in a context that is otherwise mostly characterized by non-binding commitments and various forms of support to implementation. The ecosystem approach offers a clear entry point, because – despite being called an approach – it arguably considers ecosystem functioning and resilience as the unavoidable limits of every human activity taking place in an ecosystem, and it would thus (at least in principle) facilitate the formulation of quantifiable boundaries for biosphere integrity in terms of legal obligations. The guidance on the ecosystem approach provided within CBD work and in the other applicable regimes, in other words, could benefit from a clearer engagement with the scale mismatch discussed in this post, underlining that domestic laws and policies have a measurable link with global responsibilities.

Finally, the notion of biosphere integrity could inspire a post-2020 global biodiversity framework and institutional architecture more closely framed around the need to combine collective action with domestic commitments, a vision recently suggested by a group of prominent scientists as well as by the above-mentioned Bogis-Bossey dialogues. In contrast with the 2/1.5 °C target that has become the cornerstone of the climate regime, international biodiversity law still lacks an overarching, quantifiable goal that could clearly connect national efforts and global biodiversity loss. The continued efforts towards the definition of a planetary boundary for biosphere integrity could contribute to the articulation of such a goal and tap into the positive cooperation dynamics created by the adoption of the Paris Agreement for its implementation. A post-2020 regime for biodiversity modelled after the Paris Agreement (for example in the form of a Protocol to the CBD) could help raise ambitions, articulate a sense of shared purpose that countries could get behind, and strengthen monitoring mechanisms. Moreover, it would harness the potential of bottom-up dynamics, ensuring countries could link ‘national contributions’ with an overarching goal and use them to create synergies between biodiversity and other areas of law and policy. Lastly, and perhaps most importantly, it would hopefully establish the biodiversity crisis at the top of the political agenda, in a way that has so far escaped experts and practitioners despite a widespread consensus on the core role that biosphere integrity plays, alongside a stable climate system, in underpinning all other Earth System processes. With the update to the Strategic Plan for Biodiversity 2011-2020 set to be agreed by the CBD at its COP-15 in less than two years, the window of opportunityis rapidly closing.

Dario Piselli is currently a Ph.D. candidate in International Law at the Graduate Institute of International and Development Studies and a researcher at its Centre for International Environmental Studies, working on ecosystem-based approaches to conservation in international law and on the contribution of public-private partnerships to the implementation of the Sustainable Development Goals. A graduate of the London School of Economics and Political Science (MSc in Environment and Development) and of the University of Siena (JD, cum laude), his main areas of interest include international environmental law and governance, trade, climate change, global health and social-ecological resilience. Since 2012, Dario has collaborated with the UN Sustainable Development Solutions Network (SDSN), first as a Project Member of SDSN Mediterranean and most recently as the Project Leader for Solution Initiatives of SDSN Youth. In July 2017, he was the co-recipient of an Erasmus+ Grant for a Jean ... Read Full
More posts by the Author »
EJIL: Live!