Goal-setting in an era of mass extinction: a planetary boundary for biosphere integrity in international biodiversity law? (Part I)

Goal-setting in an era of mass extinction: a planetary boundary for biosphere integrity in international biodiversity law? (Part I)

The recent publication of the UN Secretary-General’s Report on ‘Gaps in International Environmental Law’ comes at a particularly critical juncture for the protection of the world’s biodiversity. The Report was released just days after the conclusion of the 14thConference of the Parties to the Convention on Biological Diversity (CBD), which has expressed deep concern about countries’ lack of progress in the achievement of the Convention’s Aichi Biodiversity Targets by 2020. Furthermore, it closely follows a number of other urgent calls for action, including those contained in WWF’s Living Planet Report and in the four bleak regional assessments conducted by the Intergovernmental Panel on Biodiversity and Ecosystem Services (IPBES).

The widely anticipated failure of the CBD’s Strategic Plan for Biodiversity 2011-2020 has been used as a starting point by some to advocate for a renewed ‘global deal for nature’. The Gaps Report itself, beyond its endorsement of a future Global Pact for the Environment, is especially scathing in its ‘indictment’ of biodiversity-related instruments in international law. The Report builds on years of scholarly debates in this field and focuses on, inter alia, the absence of a coherent structure of international biodiversity law, the lack of binding commitments and poor national implementation of voluntary ones, inadequate integration of biodiversity into other law- and policy-making arenas, insufficient use of ecosystem-based approaches to conservation, and lack of attention paid to interconnectedness of ecosystems within and outside protected areas.

Recognizing the need for innovative legal instruments that can capture the complexity of ecological relationships and mitigate the pervasiveness of anthropogenic interference on the Earth’s biodiversity, the international community has indeed embarked on the preparation of a post-2020 global biodiversity framework, as well as on the negotiation of a new treaty applying to biodiversity beyond national jurisdiction. What is arguably missing in both the Gaps Report and these wider intergovernmental efforts, however, is a thorough analysis of the underlying reasons that have prevented existing international biodiversity law from being effective in curbing global extinction rates and unsustainable patterns of ecosystem destruction and degradation, despite decades of legal developments and a robust apparatus of subsidiary bodies tasked with providing scientific and technical advice. Without a similar analysis, the risk of future biodiversity regimes falling back on business-as-usual approaches will probably remain very high.

In this post, I first describe one particularly problematic aspect of international biodiversity law, namely the difficulty of identifying substantive obligations (i.e. obligations of result) applying to biodiversity located within national jurisdiction despite increasing awareness about the interconnectedness of ecological processes occurring at different spatial scales. Secondly, I suggest the potential of the planetary boundaries framework first developed in 2009 by Rockström and others to provide quantifiable measures of ‘biosphere integrity’ that can help define these international obligations. Finally, I propose four ways in which international biodiversity law (including its institutional arrangements) could be used to incorporate a planetary boundary for biosphere integrity.

In Earth System science, biodiversity loss is usually described as a process characterized by strong cross-scale interactions between the level at which changes in elements of biodiversity happen and the impacts of such changes at larger spatial scales. In other words, global biodiversity loss is the consequence of a loss of genes, species and ecosystems that occurs primarily at regional, national and local levels, partly because of indirect global-scale drivers but also, crucially, due to direct local pressures such as species overharvesting or conversion of land to agricultural and urban landscapes, among others. In addition to the localized impacts it has on ecosystem functioning and resilience, biodiversity loss can then cascade through the Earth System, influencing the global flows of ecosystem services, increasing the likelihood of dangerous regime shifts, and affecting other planetary processes (e.g. ocean acidification, climate change, biogeochemical flows and so forth). Within the planetary boundary framework, these Earth System-wide aspects of changes in elements of biodiversity are described as ‘changes in biosphere integrity’ and identified as one of the two core boundaries (together with climate change) that could on their own push the Earth System out of its 11,700 year-long Holocene state.

From a governance perspective, it could thus be argued that biodiversity loss represents a very specific type of global collective action problem, because human activities at the local scale do not directly affect a component of the Earth System, but rather generate a series of cascading impacts which reverberate across scales and alter the integrity of the biosphere, which is a global public good. This adds considerable complexity to the identification of a link between the actions taken locally to mitigate biodiversity loss and their effects on the integrity of the biosphere as a whole, unlike what happens, for example, with local greenhouse gas emissions immediately entering the atmosphere and thereby impacting on the global climate system.

In a legal context, this mismatch between the global interest in safeguarding biodiversity’s contribution to the stability of the Earth System and the local dimensions of biodiversity loss can be framed through the lenses of the struggle between the concept of common concern of humankind, on the one hand, and the principle of permanent sovereignty over natural resources on the other. This is not to dismiss, of course, the relevance of international rules applying to transboundary resources or to areas beyond national jurisdiction, both of which experience the same drivers of biodiversity loss occurring at a national or sub-national level. It should be noted, however, that in these last two cases the definition of legal obligations is firmly anchored to the traditional division that exists in international law between national territory, shared resources and common areas. By contrast, the ever-expanding evidence about the interconnectedness of ecological processes at different spatial scales directly confronts the dichotomy between the domestic and the international, because it reinforces the idea that setting limits to the exploitation of genes, species and ecosystems within national jurisdiction might be necessary to protect biosphere integrity as a common concern of humankind.

Presence and intensity of positive feedbacks between the boundary of biosphere integrity and the other planetary boundaries. Source: Steffen et al. (2015), adapted from Mace et al. (2014): 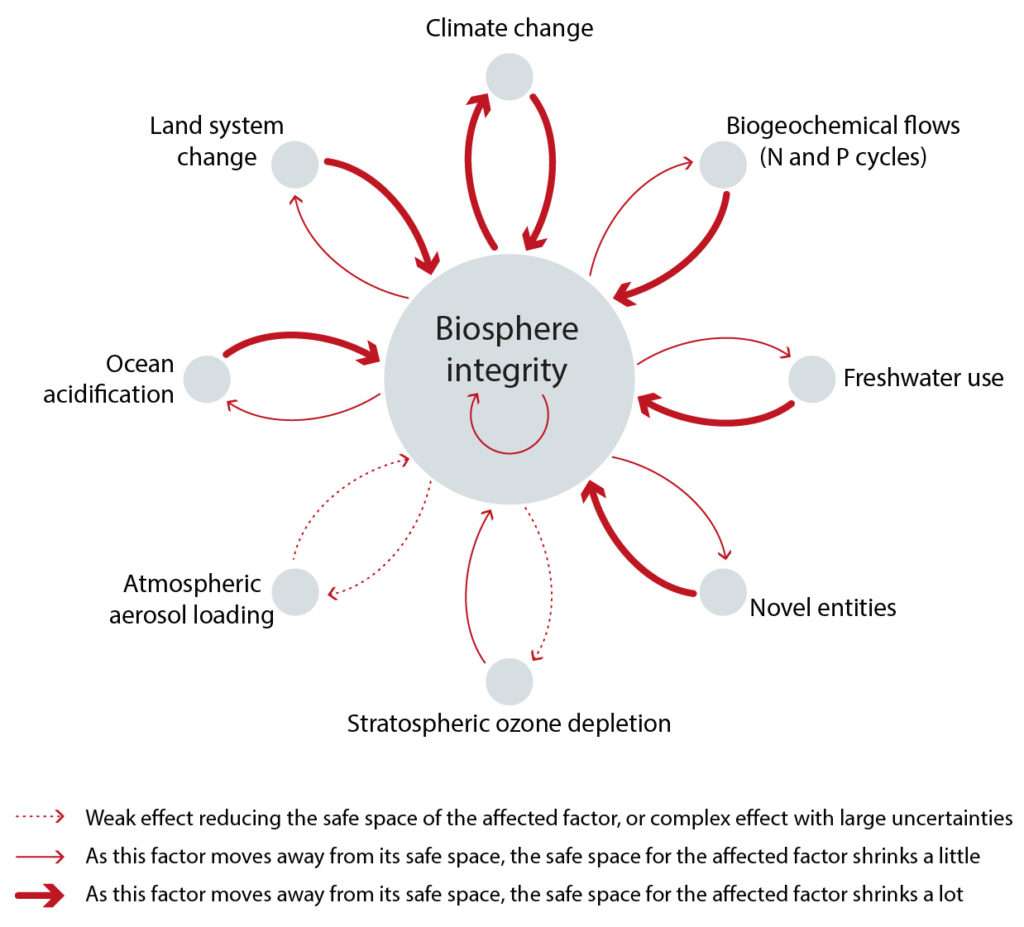 With the principle of permanent sovereignty still enshrined at the core of international biodiversity law (e.g. in Article 3 of the CBD), the articulation of substantive principles and rules governing countries’ responsibility towards the international community for the conservation and sustainable use of biodiversity located within their national jurisdictions has so far proved elusive. On the one hand, various attempts to introduce elements of stewardship and global responsibility within the notion of permanent sovereignty have been proposed in legal scholarship, but they have all had negligible impacts on actual international law-making on biodiversity. On the other, the legal and political challenges associated with this task have so far been compounded by the obstacles faced by scientists in defining planetary metrics for biosphere integrity that could be scaled from regional and local levels in order to help formulate such rules, and perhaps even propose an overarching goal for the cluster of biodiversity-related multilateral environmental agreements (MEAs).

In the context of the preparations for a post-2020 global biodiversity framework, the urgency is well-understood. For its part, the CBD has traditionally relied on qualitative scientific inputs to develop policy recommendations and support national implementation, and the few quantitatively-framed Aichi Biodiversity Targets have sometimes been criticized as arbitrary and not necessarily effective (e.g. Target 11, which calls on countries to protect – by 2020 – at least 17 per cent of terrestrial and inland water and 10 per cent of coastal and marine areas). As a consequence, the recent Bogis-Bossey Dialogues convened by the Secretariat of the Convention as part of a participatory roadmap for the new framework have emphasized the need for both (a) a science-based, quantifiable global target for biodiversity equivalent to the 2/1.5 °C target used in the climate regime, and (b) increased linkages between this global target and national-level targets.

What is certain, in other words, is that the ongoing decline of global biodiversity needs to be addressed through appropriate legal innovations that take the cross-scale dimension of this process into account as a means of catalyzing country-level action. How should we get there? The conceptual framework of ‘planetary boundaries’, and particularly its definition of a planetary boundary for biosphere integrity, could arguably be an important tool in this fight.  My next post discusses my proposal.

Dario Piselli is currently a Ph.D. candidate in International Law at the Graduate Institute of International and Development Studies and a researcher at its Centre for International Environmental Studies, working on ecosystem-based approaches to conservation in international law and on the contribution of public-private partnerships to the implementation of the Sustainable Development Goals. A graduate of the London School of Economics and Political Science (MSc in Environment and Development) and of the University of Siena (JD, cum laude), his main areas of interest include international environmental law and governance, trade, climate change, global health and social-ecological resilience. Since 2012, Dario has collaborated with the UN Sustainable Development Solutions Network (SDSN), first as a Project Member of SDSN Mediterranean and most recently as the Project Leader for Solution Initiatives of SDSN Youth. In July 2017, he was the co-recipient of an Erasmus+ Grant for a Jean ... Read Full
More posts by the Author »
EJIL: Live!