On October 3, 2015, at 2:08a.m., a U.S. Special Operations AC-130 gunship attacked a Doctors Without Borders [Médecins Sans Frontières, MSF] hospital in Kunduz, Afghanistan, with heavy fire. Forty-two people were killed, mostly patients and hospital staff members. Dozens of others were injured, and the hospital building was severely damaged and subsequently closed. When the dust finally settled, the question that pre-occupied the press and most pundits was whether this was a war crime.

Attempts to answer this question prompted discussions about the relevant laws and their proper interpretation, which, in turn, fueled disputes about specific facts relevant to these laws. Recent news stories about the Trump administration’s plan to relax some of the battlefield rules further intensified the legal controversies. Unfortunately this focus on questions of law, guilt, and blame divert attention from the more basic questions of what actually happened, why it happened, and what might be done to prevent similar incidents in the future.

The attack on the Kunduz hospital and the controversy that followed it exemplify a broader phenomenon. Legal fact-finding reports set to resolve factual disputes often trigger more controversies, and are poorly equipped to mobilize domestic sanctioning and condemnation of war criminals by their societies. People are motivated to believe what they already know, and to reject facts that are inconsistent with their prior beliefs and political ideology. Legal fact-finding reports are susceptible to social biases just as any other source of information. Therefore, they often fail to create a shared understanding of ‘what happened’ or to combat denialism of crimes. They also lack the emotional appeal, participatory value, and social cues that moral expressions or other types of social truth-telling entail.

One such example is the overwhelming rejection by Israeli society of the 2009 Goldstone fact-finding report. The report, which accused Israel of committing war crimes and crimes against humanity, was condemned by most Israelis as “false and distorted,” a reflection of “double standards” and antipathy to their beleaguered state. The national Israeli ethos that “the IDF is the most moral army in the world” was repeated continually. More importantly, the language of the Goldstone report shifted the focus of attention from factual questions about the number of casualties, or the causes of death, and the decision-making processes that lead to the bombing of civilians, to highly politicized questions about the legal definitions of “direct participation in hostilities” and “proportional collateral damage.” As Marco Milanovic Recently demonstrated, even an established court, such as the International Criminal Tribunal for the Former Yugoslavia (ICTY), has failed to produce a shared narrative of events and to combat denialism. In fact, twenty years on, barely 20% of Bosnian Serbs believe that any crime (let alone genocide) happened in Srebrenica.

As evidence of backlash and rejection of legal fact-finding reports mount, it is time to develop ways to evaluate the intended and unintended outcomes of international and domestic investigations of wartime events. In a forthcoming article in the Chicago Journal of International Law, I attribute some of this backlash to the legal discourse adopted by international fact-finding bodies, and their focus on legal accountability and blame. To directly measure the impact of legal discourse on attitudes and beliefs, I fielded survey-experiments with representative samples of 3,000 U.S. nationals. Participants read a short summary of an international fact-finding report concerning an incident in which U.S. Marines killed civilians in Afghanistan. For all participants, the report included the same set of facts, but for some participants the report concluded that the U.S. Marines violated international law, for others it read that they had committed war crimes, for others that it had violated moral standards, and for still others that it had acted completely lawfully or completely morally. A final group of participants read the summary of the facts alone, without being given any final judgment or conclusion. After reading the facts and the judgment, participants were asked about their opinion on the accuracy, objectivity, fairness and believability of facts, as well as their levels of support for various accountability measures.

As expected, liberals and conservatives differed in how willing (or unwilling) they were to believe facts and conclusions suggesting U.S. misconduct. Individuals who hold conservative ideological beliefs were significantly more likely than those who hold liberal views to discredit information that incriminates U.S. soldiers for committing war crimes in Afghanistan. Individuals who hold liberal ideological beliefs were significantly more likely than those holding conservative ideological beliefs to discredit information absolving the U.S. from responsibility for war crimes. These findings are consistent with other studies measuring political and ideological polarization in the U.S. society relating to other sources of information (“the hostile media bias”) and other social controversies (death penalty, global warming). It is nonetheless valuable to establish the failure of authoritative legal institutions to effectively resolve factual controversies, as “recording the truth” and “combating denialism” are chief goals of legal fact-finding mechanisms. 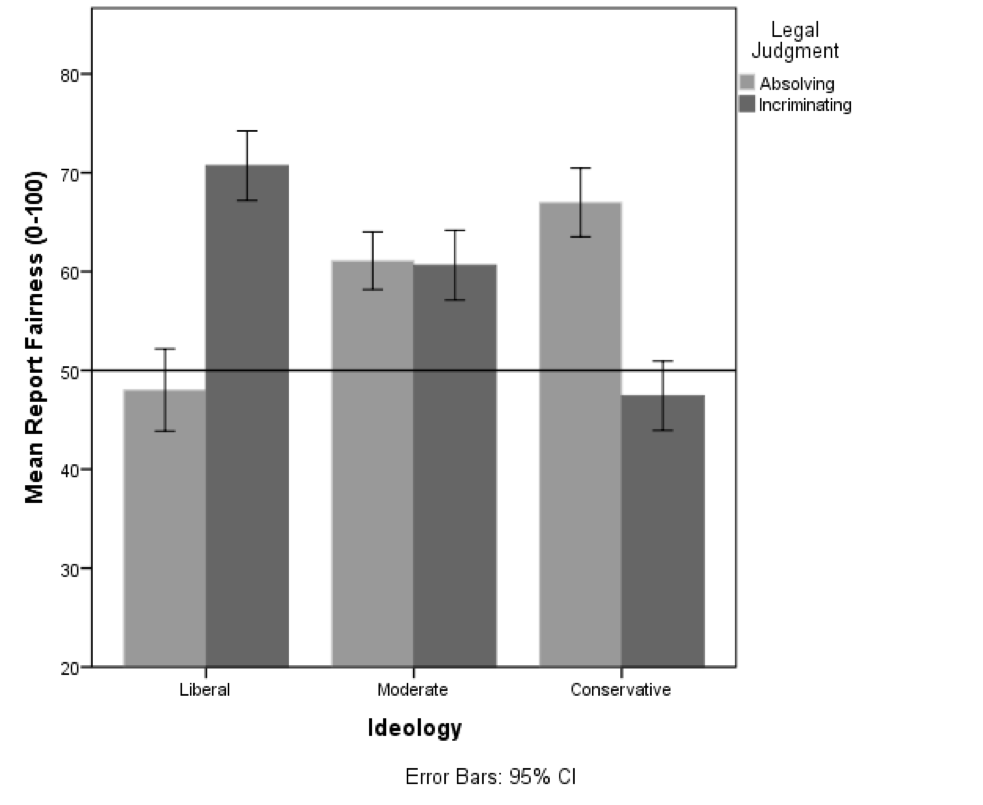 Figure presents the mean values of the Report Fairness, by ideology. 95% CI’s shown.

In addition to testing willingness to believe the facts, the experiments also tested the impact of fact-finding reports on attitudes about various accountability measures. I found that participants were more willing to support compensating Afghan victims and sanctioning the U.S. soldiers responsible for the attack when their misdeeds were described as a violation of moral standards than when they were described as a violation of international law. The experimental manipulation was very subtle: instead of describing the relevant norm as “legal” standard it was described as a “moral” standard. The standard itself, as well as the judgment (and everything else), were identical. Finding that when prompt with a “moral” standard people may be more inclined to condemn their fellow nationals for committing war crimes and demonstrate more empathy to out-group victims is powerful, because it demonstrates that even when keeping the technical and formalistic structure of legal reports––and the exact same standards––individuals are more likely to be influenced by the report when we frame the findings as moral, rather than legal. A possible explanation for this finding lies in the public perception of legal findings as adversarial, technical, and too complicated for non-lawyers to understand. In contrast, a conversation about morality is inclusive, does not require sophisticated legal knowledge, and is more intuitive. 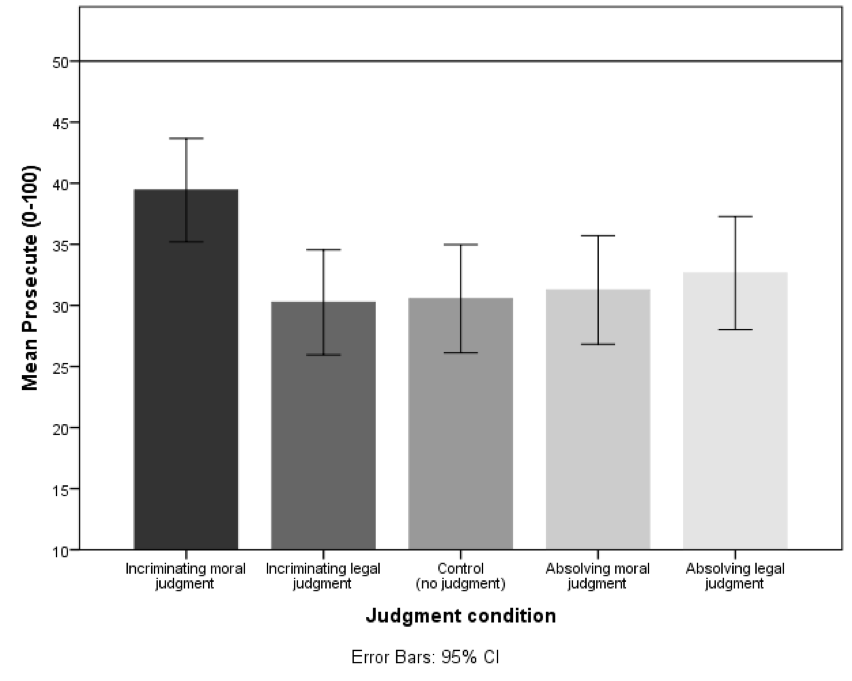 Let us now return to the attack on the MSF hospital in Kunduz. At the time of this writing, Doctors Without Borders, the UN Assistance Mission in Afghanistan, and several other human rights organizations, continue to demand the establishment of a legalized fact-finding mission to investigate the attack (or to task the existing IHFFC with this responsibility). It seems that the international community has been trapped in the misconception that legal fact-finding is the only method to resolve wartime controversies and mobilize for action. However, as my research suggests, it may be the case that legal fact-finding is ineffective in realizing both.

Based on MSF’s communications, it seems that the organization’s main goal is not individualized prosecutions and adjudication, but rather protecting its people, its medical facilities, and its patients from future attacks. To achieve this goal, it would be wise to focus on systemic failures rather than on individual blame. We have come to recognize that in investigations of medical and aviation catastrophes, a “learning from failure” approach, one focusing on organizational culture, decision-making processes, and structural biases leading to erroneous risk assessments, has many benefits with regard to prevention of recurrences. Such an approach is better suited to motivate information sharing and disclosure, as well as organizational reform. It would also shift the focus of attention from issues relating to legal interpretation and individual criminal responsibility to broader issues, such as biased decision-making processes and other structural biases, which may better account for some of the failures leading to the attack on the Kunduz hospital. In a current study, I continue exploring the impact of different fact-finding methods, including comparing a ‘learning from failure’ design with the traditional legal design.

Henry Kissinger once defined the creation of a fact-finding mission as “the standard device for diplomats signaling that inaction is the desired outcome.” Insofar as the goal of such a mission is determination of legal responsibility and punishment of guilty parties, history confirms Kissinger’s cynical observation. In our “post truth” era, where ‘alternative facts’ are often produced to counter unwelcomed facts and narratives, it is more important than ever to seek new and better ways to produce and introduce information, and prompt reforms based on the lessons learned.

Shiri Krebs is a Senior Lecturer (Assistant Professor) of Law at Deakin Law School in Melbourne, Australia, and a Law and International Security Fellow at the Stanford Center on International Security and Cooperation (CISAC), Stanford University. Her research focuses primarily on the complex relationship between legal rules and fact-finding, at the intersection of law, politics, and social psychology. Krebs’ scholarship and publications granted her several awards, including the Steven M. Block Civil Liberties Award (2011), the Richard S. Goldsmith Award in Dispute Resolution (2012), and the Franklin Award in International Law (2015). In 2016 she was selected by the American Society of International Law (ASIL) for the New Voices Panel at the Society’s Annual Meeting. Her past experience includes serving as legal advisor to the Chief-Justice of the Israeli Supreme Court (2005-2010), working for the Israeli Democracy Institute, and teaching international law at Santa Clara ... Read Full
More posts by the Author »
EJIL: Live!