In carrying out this evaluation the authors faced a number of challenges. Firstly, none of the reform scenarios has been intended to specifically address the duration of ISDS proceedings except for some of the improvements suggested by the scenario “Investment Arbitration (IA) improved”. As a result, the impact on the duration of ISDS proceedings is more of a collateral damage or benefit of the reform proposals under discussion and is, accordingly, not always easy to ascertain. Secondly, the length of investment arbitration is so heavily fact-specific that it seems to defy all attempts at generalisation. Thirdly, short proceedings are not automatically better proceedings. Shortening proceedings can affect dispute resolution in complex ways and involves trade-offs. These have to be made clear.

When are proceedings excessively long?

The European Court of Human Rights, when analysing whether proceedings take place within a reasonable time under Art. 6 of the ECHR, has held that the reasonableness of the length of proceedings “must be assessed in the light of the circumstances of the case and with reference to the following criteria: the complexity of the case, the conduct of the applicant and of the relevant authorities and what was at stake for the applicant in the dispute” (Comingersoll S.A. v. Portugal [GC], no. 35382/97, § 19) and thus confirmed the fact-specific nature of the determination.

How long are ISDS proceedings?

We will present three datasets on the length of ISDS proceedings: ICSID undertook a review of case duration as part of its rule amendment project, for which it reviewed 63 cases which concluded with an award between 1 January 2015 and 30 June 2017.The review’s result were presented in the following graph: 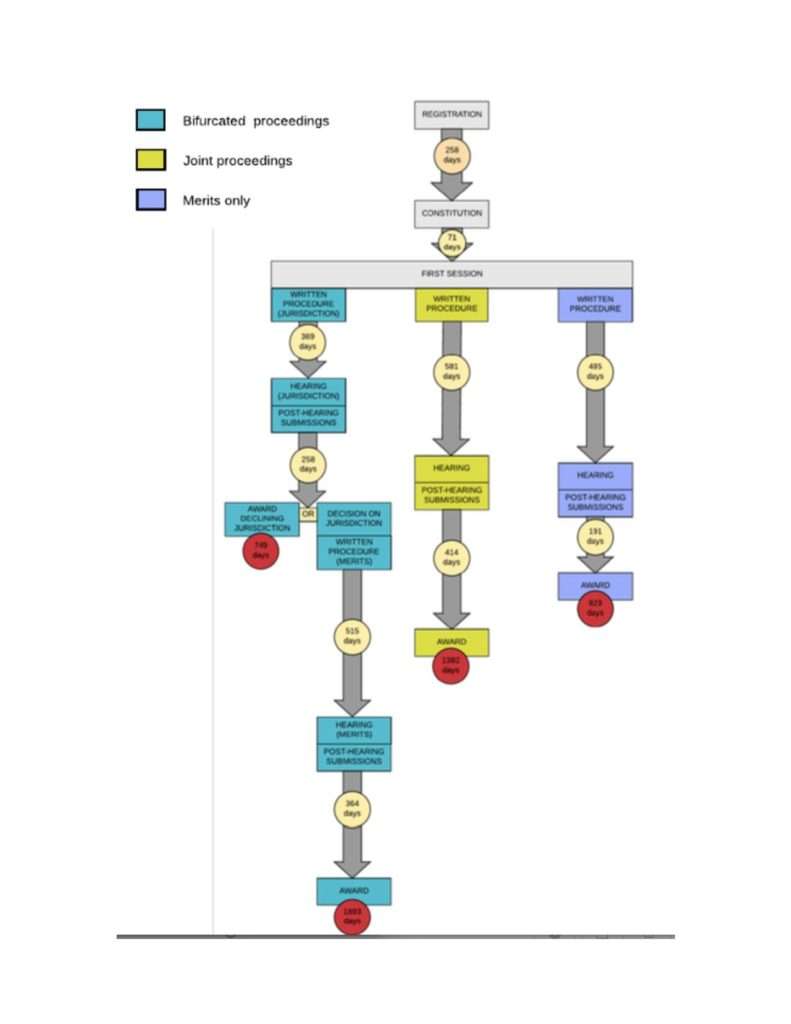 As to annulment, the data set gives the following lengths:

Langford et al. come to the conclusion that procedural events are the most likely to prolong arbitration: bifurcation, arbitrator challenges and replacement as well as the existence of a dissenting opinion stand out when it comes to explaining longer duration (M. Langford et al., What do we Know?, ISDS Forum).

What is the effect of the reform proposals on the length of ISDS proceedings?

We will now tackle, one by one, the various reform proposals to gage their possible effect on the length of proceedings.

The first possible reform consists in targeted changes to investment arbitration. Recent ICSID proposals for rule amendments give some guidance as to which changes could be made. Possible changes include speeding up the constitution of arbitral tribunals by triggeringthe default method of appointment automatically; an obligation of conducting proceedings in an expeditious manner; more flexible handling of hearings and witness examinations to avoid the risk of repeating evidentiary exercises in the case of bi- or trifurcation; speeding up the deliberation process and imposing a stricter time limit for delivery of the award; introducing expedited arbitration proceedings with the consent of the parties by a sole arbitrator as proposed for the ICSID Arbitration Rules; simplifying claims consolidation and, where not available, claims coordination; abolishing bifurcation. While these proposals can in some circumstances lead to shorter proceedings, not all of the proposed measures are likely to have a significant impact. Moreover, they involve trade-offs: Speeding up the composition of the tribunal and hearings can limit the right to select arbitrators, and impact the right to be heard, respectively, if the time limits become too strict; similarly strict and too short time limits on writing awards might undermine the quality of awards.

The second proposal is to introduce an appellate mechanism in investment arbitration. The proposal dates back at least to the 2004 proposal for the amendment of the ICSID Arbitration Rules. We do not take a view on the general merits and demerits of such a reform and will focus on its effects on duration. If constituted as the only available mechanism, excluding annulment under the ICSID Convention or the setting aside procedure for non-ICSID awards, an appellate mechanism could save much time. As such, the system could consider the challenge of an arbitral award based on the existence of a procedural irregularity, as set out in Article 52 of the ICSID Convention, as well as for well-defined errors of law and, possibly of fact (within a narrow definition, arguably). Time could also be saved if the appellate body is entrusted with the power to render a new arbitral award where it admits the appeal in part or in full. The resubmission of a case after the annulment proceedings has the potential to add between 5 and 10 years. However, if the proposed appellate mechanism is considered as an addition to the existing remedies against arbitral awards, i.e. setting aside proceedings in the courts at the place of arbitration and annulment under the ICSID Convention, etc., it will necessarily add significant delays in obtaining a final resolution of the dispute.

The third proposal is to establish a Multilateral Investment Court (MIC). It is difficult to predict the procedures of the MIC. In some respects, a MIC model could speed up the proceedings: the constitution of the tribunals would be more expeditious as adjudicators are pre-elected. There would likely be fewer grounds for time-consuming challenges of MIC adjudicators, as they are pre-approved members of a standing-judicial body. However, a MIC is also less flexible to adapt to an increasing caseload, the length of proceedings will depend on the quality of its administration, the appointment process of judges will likely be politicised.

Dr Holger Hestermeyer’s is the Shell Reader in International Dispute Resolution at King's College London and a Senior Research Fellow at the Transnational Law Institute. Holger is currently also the Co-Executive Vice President of the Society of International Economic Law. Read Full
More posts by the Author »