China, the Philippines and Oil Rig HD-981: A New Flashpoint in the South China Sea Dispute

China, the Philippines and Oil Rig HD-981: A New Flashpoint in the South China Sea Dispute 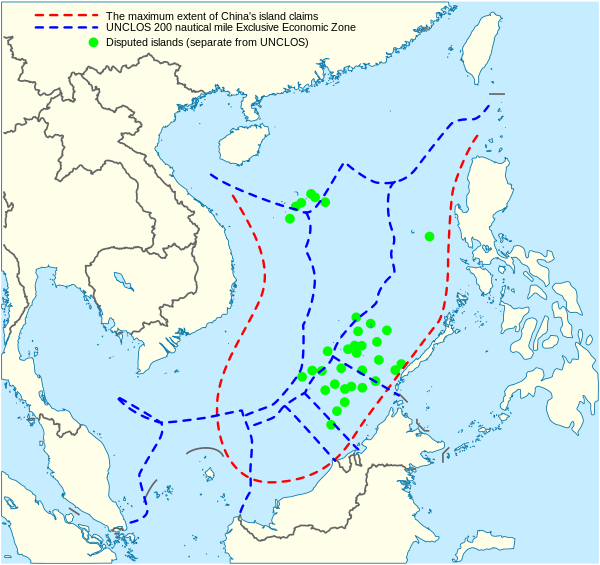 Tensions between China and Vietnam over the disputed Paracel islands erupted into anti-Chinese riots this week in Vietnam. The immediate cause is the positioning of a deep sea exploratory oil rig, the HD-9H1, 17 nautical miles from Triton Island, the south-western most feature of the Paracel group. It is also within 200 nautical miles of the Vietnamese coastline and therefore potentially within the EEZ of Vietnam. (The map at left shows China’s claims in the South China sea as well as each country’s 200-mile exclusive economic zone. Click to enlarge. Credit.)

The underlying dispute is of course whether Vietnam or China has sovereignty over these maritime features. If they do belong to China, any maritime zone they generate would be opposable to Vietnam and a maritime delimitation would be needed to sort out the respective boundaries. Is recourse to international dispute resolution – if not by consent, then initiated by Vietnam – likely in such a case?

The situation obviously has some parallels with the Philippines v China arbitration initiated under the UN Convention on the Law of the Sea (UNCLOS). Indeed, such Annexe VII arbitrations under Part 15 of UNCLOS are undergoing something of a renaissance at present. Other than the Philippines v China case, there is also obviously the pending arbitration in the case of the MV Arctic Sunrise (Netherlands v Russia) – both cases in which a major power has threatened nonappearance. More positively, hearings under the auspices of the Permanent Court of Arbitration recently concluded between Mauritius and United Kingdom concerning the dispute which followed the UK’s pronouncement of a marine protected area around the Chagos archipelago. The attraction of UNCLOS arbitration is that dispute resolution under the Convention is, in principle, compulsory; the downside is that it is riddled with complex exceptions. (As I have noted in a previous post.)

Could this be the next case to go to an Annexe VII Tribunal? The problems with relying on this mechanism to resolve maritime boundary disputes, or disputes concerning the underlying title to an island, are well known. First, there is an opt-out provision under Article 298 of the UN Convention on the Law of the Sea regarding maritime delimitation disputes. Essentially, a state making a relevant declaration under that article can exempt from the scope of compulsory dispute settlement under UNCLOS any dispute concerning maritime delimitation. China has lodged such a declaration.

However, there may be other, less contentious, avenues to UNCLOS arbitration in a case like this. Robert Beckmann suggested in a recent AJIL article that the clever thing to do would be to bring a dispute about whether such features in fact count as an island under the Convention capable of generating an exclusive economic zone or continental shelf claim at all.

Under Article 121 of UNCLOS, an island is (implicitly) defined as being capable of sustaining human habitation and an independent economic life of its own. This forms a prerequisite for an island generating continental shelf claims for an exclusive economic zone. Other maritime features which are consistently above water are at best “rocks” capable of generating only a 12 nautical mile territorial sea.

Triton island is apparently a 1.5 km long sandy coral cay, which seems rather unlikely to qualify as an island in the Convention sense. It may be that irrespective of which state – if any – enjoys sovereignty over this maritime feature it cannot in any event sustain a claim to maritime zones more than 12 nautical miles from its baselines. If this is the case, China may have no arguable basis for its present oil exploration activity 17 nm from the “island”.

However, when public opinion is running high and issues of sovereignty are being debated strategic litigation on such a narrow question is unlikely to be the order of the day.

Douglas Guilfoyle is Associate Professor of International and Security Law at the School of Humanities and Social Sciences, University of New South Wales Canberra at the Australian Defence Force Academy. He is a 2019-2020 Visiting Legal Fellow with the Australian Department of Foreign Affairs and Trade. He blogs in a personal capacity and his views do not represent those of his employer or any other organisation. Read Full
More posts by the Author »
EJIL: Live!