First of all I would like to extend a huge thank you to EJIL:Talk! for hosting this book discussion and to the three discussants for taking the time to read the book and to provide their comments. It is a privilege, and I look forward to the debate. 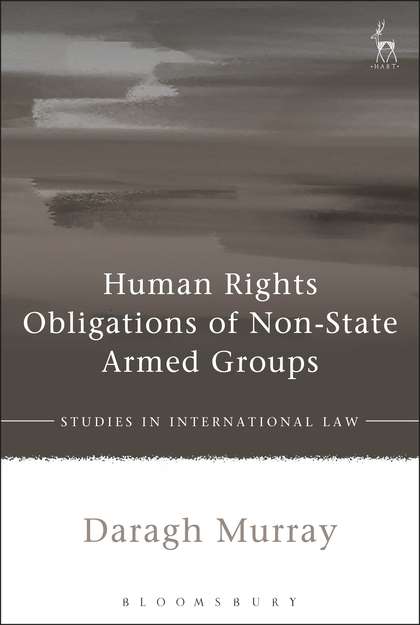 In this introductory post I would like to briefly set out why armed groups should be subject to human rights obligations, and to present an overview of my approach in relation to the two issues identified above.

Today, non-State armed groups exert significant influence over the lives of millions of people around the world. Indeed, at its height the Islamic State was reported as exercising governmental authority over up to 10 million people in Iraq and Syria, while the impact of other groups such as the CPN-M in Nepal, the LTTE in Sri Lanka, the FARC in Colombia, the Naxalites in India, or the BRN-C in Southern Thailand is well documented. The activity of these groups is demonstrably of international concern. Yet their activities are not subject to effective regulation.

For those armed groups party to a non-international armed conflict, the law of armed conflict (international humanitarian law) does establish certain rules, but these rules are primarily concerned with the conduct of hostilities, and negative obligations towards affected individuals (such as the prohibition of torture, or certain detention rules). These limited rules do not apply to armed groups not party to an armed conflict, such as the Urabenos in Colombia, or Boko-Haram prior to mid-2013.

This means that international law does not regulate the relationship between armed groups and individuals subject to their control or influence. International law does not establish how armed groups should treat these individuals, or how armed groups should govern areas subject to their control or influence. The result is a legal vacuum whereby armed groups are free to act as they wish, and there is no effective protection accorded to individuals’ (inalienable) human rights. Building on Andrew Clapham’s landmark work, this book suggests that human rights law offers a solution. But, if the law is to be developed in this area, both the legal basis for its application and how that application can work in practice must be clarified.

For armed groups, this organisational capacity can be demonstrated by the existence of (some form of) a command structure capable of enforcing internal discipline. The independence criterion will be satisfied in situations in which the State cannot reasonably impose its will: at this point the authority of the State is displaced and the armed group exists independently of any superior authority. Independence is clearly established when an armed group becomes party to a non-international armed conflict (through satisfaction of the intensity requirement). Outside armed conflict, independence is most clearly established when an armed group exerts stable territorial control to the exclusion of the State, but an armed group may also exist independently in more complex situations. It is frequently noted, for example, that the State may rule by day, but the armed group by night. In situations such as these it is the armed group’s ability to exert control to the exclusion of the State that is relevant, and not the precise contours of that control. As such, the displacement of State authority may be demonstrated by an armed group’s ability to engage in certain activity – such as the commission of internationally prohibited acts – coupled with the State’s inability to reasonably impose its will.

Turning to how international human rights law obligations can be applied to armed groups, the key concern is that the reality of armed groups be taken into account. In this regard it is noted that armed groups are not States (differing in their legal rights and entitlements), and that even amongst armed groups themselves significant differences exist in relation to capacity and the extent of influence exercised. As such, it would be inappropriate to apply human rights to armed groups in a ‘one size fits all’ manner and so a context-dependent graduated approach is proposed, whereby obligations can be progressively applied to armed groups, in keeping with the extent to which they have displaced State authority. In order to regulate the application of obligations, an adapted form of the ‘respect, protect, fulfil’ framework is proposed.

The obligation to protect requires that the armed group protect individuals from threats to their rights posed by third parties: it relates to issues of public order and the rule of law, and to the regulation of the life of the affected population. Both the preventive and remedial components of the obligation to protect require some form of legislative authority. The armed group must promulgate rules so that individuals can regulate their behaviour, and detention and prosecution may be necessary if these rules are violated. This means that the application of the obligation to protect to armed groups must be restricted to those groups who have displaced State authority and exercise exclusive control over a territory and population.

The proposed gradated approach is facilitated by the territorial State’s continuing obligations with respect to the entirety of its national territory, including those areas where its authority has been effectively displaced. Accordingly, while armed groups may be subject to a limited number of human rights obligations in a given context, the State’s continuing obligations avoids a vacuum in protection vis-à-vis the remaining rights. The result is a ’division’ of obligations between the State and the armed group. Although the concept of subjecting States to continuing obligations in armed group territory may appear disingenuous at first glance, such activity is actually relatively routine. For instance, both the Indian and Sri Lankan State continued to provide services in areas controlled by the Naxalites and the LTTE respectively, while the Iraq and Syrian Governments continued to pay the salaries of oil and gas workers in Islamic State-controlled areas.

Daragh Murray is a lecturer at the University of Essex School of Law and Director of the Human Rights Centre Clinic. He is primarily – although not exclusively – interested in issues relating to international human rights law and the law of armed conflict. His current research focuses on the human rights obligations of non-State armed groups. Read Full
More posts by the Author »
EJIL: Live!