Being Charged by an Elephant: A story of globalization and inequality

Being Charged by an Elephant: A story of globalization and inequality

Along with many economists and globalization scholars, my favorite graph these days is the elephant graph. Named for its distinctive elephant-shaped curve (see below), this graph shows the rise in real incomes for people in different income brackets throughout the world over a twenty year period of intense economic globalization (1998 to 2008). Economists often like to tell us that free trade is good because it is a rising tide that lifts all boats. What this graph suggests, however, is that economic globalization has produced clear winners and clear losers. This division seems to be playing an important role in explaining some of the rising nationalist and pro-protectionist sentiments we are witnessing in certain developed states, as shown by the rise of Trump and the vote for Brexit. 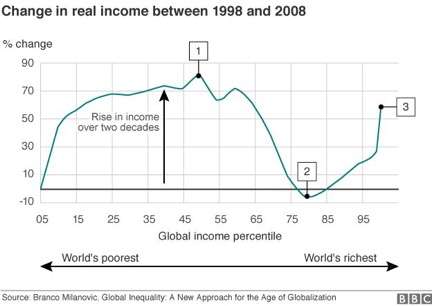 So who has won and lost in the age of economic globalization? According to the elephant graph, there have been two big winners. The first are individuals who sit in the lower to middle income tiers (between the 10th to the 65th percentiles) who have seen their real incomes go up by between 50 and 80 percent (marked as point 1 in the graph above). Although the incomes of individuals do not correlate perfectly with particular states, the vast majority of these individuals have come from the middle classes of some of the emerging economies like China and India.

But the biggest losers, at least in relative terms, are those individuals whose incomes lie at around the 75th to 85th percentile point. Again, these individuals do not map neatly onto specific states, but they include a significant proportion of some of the poor and working class people of developed states like the United States (marked as point 2 above). According to Branko Milanovic who created the chart, seven out of ten people at that point are from “old rich” OECD countries. Although these individuals are still relatively wealthy when compared to global averages, they have seen their real incomes largely stagnate over this 20 year period. Compared to others who have benefited greatly from economic globalization, many of these individuals feel left behind.

This graph provides a way of understanding two different narratives that have emerged in recent elections. A politician like Trump speaks to poor and working class voters (point 2) and says to them: America is being “raped” by China and “killed” by Mexico as a result of terrible trade deals that have ripped out the wealth of America’s middle class and redistributed it to other states around the globe (i.e., blame those at point 1). By contrast, a politician like Bernie Sanders speaks to those same disenchanted voters and says to them: the poor and working classes in America have been done over by a greedy elite while the middle class has been hollowed out by America’s failure to redistribute from the top 1 percent (i.e., blame those at point 3). One tells a story of too much international redistribution, the other a story of too little national redistribution.

As with many stories, both narratives have some truth to them and neither captures the full picture. Although the overall narrative surrounding the elephant graph is clear, the real story is –as always – more complicated. Some studies suggest that the poor and working classes in developed states have not seen their incomes go backwards, even if they have not reaped high rewards (particularly in comparison to some other groups). Factors other than economic globalization also influence the shape of the curve, such as compostitional issues (i.e., which states are included in the analysis), demographic changes (i.e., population sizes in many developing states have grown considerably faster than in most developed states, which affects the shape of the curve), and technology (i.e., many jobs have also been lost to automation rather than to foreign workers).

Even accounting for these nuances, two facts seem to remain. First, there has been a strong growth in real income for the middle classes in many developing states at the same time as there has been weak growth for the poor and working classes in many developed states. Although correlation does not equal causation, this does suggest that there is some truth to the first narrative framed above, particularly as economic globalization makes it easier to offshore manufacturing jobs from the developed to the developing world. Second, in line with the second narrative, domestic policies play a crucial role in redressing, or failing to redress, income inequality within states. Differences in how the various income brackets have fared within different developed states (like the United States and France) speak to the importance of issues such as tax and welfare policies in redressing inequalities that might be exacerbated by globalization. On these points generally, see here and here.

The elephant graph tells a powerful story about the relationship between globalization and both growing equality between states and growing inequality within states during a period of intense economic globalization. It is a story that has potentially significant domestic and international political implications. For instance, if the bottom incomes of rich states continue to stagnate while the middle incomes in various developing states continue to climb, does that mean that trade and investment treaties are likely to have ongoing destabalizing effects in developed states? If a strong democracy is correlated with having a large middle class, what will the hollowing out of the middle class mean for developed states, and the burgeoning of the middle class mean for developing states? And are we at risk of creating, or cementing, a global plutocracy as the richest 1 percent surge ahead?

This story of growing equality between states and growing inequality within states is also likely to underpin many of the developments in international economic law in the coming decades. In Africa, they tell you that if you are ever charged by an elephant, you should run for cover but, if you can’t reach cover in time, you must stand your ground and face the elephant. (As someone who was fortunate to survive being charged by an elephant whilst on foot in Tanzania, I can tell you that the advice to stand your ground is even harder to follow in practice than it sounds in theory … and it sounds very hard in theory.) With the rise of anti‑globalization sentiments in the United States, the United Kingdom and Europe, we may well see many developed states run for cover. Indeed, we have already seen Trump withdraw from the TPP, the TTIP negotiations be shelved and discussions about renegotiating NAFTA be put on the agenda.

However, many states in Asia have done well out of the last few decades of globalization. Indeed, of the people around the median whose real incomes almost doubled during this period, 9 out of 10 of these “winners” were from “resurgent Asia.” Perhaps it should come as no surprise, then, that China has become a champion of further international economic integration and many eyes have turned to focus on the ongoing RCEP negotiations, which is the mega-regional trade and investment agreement currently under negotiation among the ASEAN states and Australia, China, India, Japan, South Korea and New Zealand. Some members of the TPP are also looking to push that deal forward without the United States. It is too early to tell how these negotiations will play out. But, given the generally more positive experiences many of these states have had with economic globalization over the last few decades, states in the Asia Pacific seem to be more likely than others to stand their ground in the face of this charging elephant.

Anthea Roberts is a Professor at School of Regulation and Global Governance (RegNet) at the Australian National University and a Visiting Professor for the Masters of International Dispute Settlement at the Graduate Institute and the University of Geneva. Anthea attends UNCITRAL Working Group III as part of the Australian delegation but she acts and writes in her independent academic capacity. She is a specialist in public international law, investment treaty law and arbitration, comparative international law and geoeconomics. Prior to joining the ANU, Anthea taught at the London School of Economics, Columbia Law School and Harvard Law School. She is serving or has served on the editorial boards of the American Journal of International Law, the European Journal of International Law, the Journal of World Trade and Investment and ICSID Review. She is also a Contributing Editor for EJIL: Talk! and Read Full
More posts by the Author »
EJIL: Live!