Oliver Daum is a Ph.D. candidate and research associate at the Chair of Public International Law at the University of Trier, Germany. 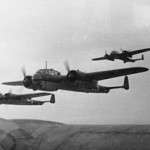 On 11 June this year a consortium of mostly British partners and stakeholders successfully lifted a seventy year old German military aircraft – a ‘Dornier Do 17’  (photo left, credit)– from the bottom of the English Channel. It is estimated that about two thousand military aircrafts of the type Do 17 were employed by the Luftwaffe during World War II. According to the Royal Air Force (RAF) museum, the recovered aircraft is supposedly the ‘world’s last surviving Dornier Do 17’ and will be exhibited after conservation at the museum in Cosford, England.

Neither media reports covering the salvage operation of the Do 17, nor the RAF museum have provided any details concerning ownership of the ‘Flying Pencil’ (which is how the Do 17 was called due to its slim silhouette). As Anastasia Strati stated in her 1999 commentary to the Draft Convention on the Protection of Underwater Cultural Heritage, the issue of the legal status of shot and sunken military aircrafts and sunken warships is ‘subject to great uncertainty’.

This comment aims to briefly summarize the major legal issues concerning ownership, State immunity and the appropriate international jurisdictional basis for salvage of the Do 17. I conclude that the Do 17, after the deliberate and successful salvage, is still and was at all times subject to German State ownership. The United Kingdom may not provide a jurisdictional basis to refuse delivery of the Do 17, should it be claimed by the German authorities. However, as the Flying Pencil’s discovery first took place back in 2008, it appears that German governmental authorities, due to the time and possibilities elapsed ever since, were and are not willing to interfere.