The world has lost one of its greatest international humanitarian law scholars. 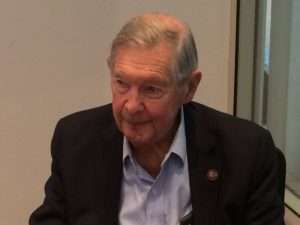 On Wednesday 6 September 2017, at the respectable age of 93, emeritus professor Frits Kalshoven passed away. Professor Kalshoven was one of the most well-known and respected international humanitarian law (IHL) scholars, but above all, he was a very kind, warm and humble person – insisting, for example, to always be addressed by his first name. He was a mentor on IHL for us, as he has been to so many. Indeed, for years, the first introduction to IHL for many students was his book “Constraints on the Waging of War”.

Frits began his career as an officer in the Royal Dutch Navy (1945-1967). During his service, he studied law in Leiden. After completing his studies in 1958, he taught law, including IHL, at the Royal Naval Academy. When he left the navy, he joined the law school of Leiden University, where he wrote his PhD on belligerent reprisals (1971), the publication of which is still regarded the standard work on this topic (and which was reprinted in 2005). Between 1975 and 1989, he held the Red Cross Chair in IHL at Leiden University and subsequently was a professor at Groningen University (1999-2002), before returning to Leiden as professor emeritus. As a member of the Dutch delegation, he negotiated, and was one of the drafters, of the 1977 Additional Protocols; and the Certain Conventional Weapons Convention of 1980.

Frits had an enormous passion for IHL. Although he gave his valedictory lecture in 1989 in Leiden, he never really actually retired, but rather continued to be actively involved in the humanitarian law field, helping to shape and develop it. Besides teaching full courses and guest lectures at various universities, he was the first Chairman of the UN Commission of Experts to investigate serious violations of IHL in the Former Yugoslavia (1992-1993), and was a member and president of the International Humanitarian Fact-Finding Commission (1991-2001). He was a long-term Advisor to the Board of the Netherlands Red Cross (1971-1993), and after that always ready to support its IHL department with advice and contributions to its events. Until the very last moment, he continued to attend international law events to engage with other scholars and practitioners, in nearby The Hague, but also in San Remo. END_OF_DOCUMENT_TOKEN_TO_BE_REPLACED