A Response: The Child in International Refugee Law

A Response: The Child in International Refugee Law

I am grateful to each of the participants for engaging with The Child in International Refugee Law in such a thoughtful way.

As all four contributions have identified, the central thesis of The Child in International Refugee Law is that the the Convention on the Rights of the Child (“CRC”) has a critical role to play, alongside the 1951 Refugee Convention, in enhancing the visibility and protection afforded to refugee children. Rather than simply asserting a need for greater interaction between the 1951 Refugee Convention and the CRC, the book attempts to map out the substantive contours of that relationship, and to anchor the relationship in the international rules of treaty interpretation. 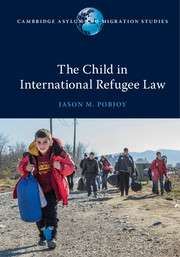 This is, of course, where the beauty of the constituent elements of Article 31 VCLT, and their inbuilt flexibility, really come to the fore. The adoption of a general, closely integrated rule, underscores the need to look beyond a literal construction of the text, and to consider the terms of the treaty in light of their object and purpose, in their context and taking into account subsequent extrinsic sources. Those extrinsic sources cannot, however, be relied upon to displace the text, or to undermine its object and purpose. This provides an answer to the various attempts by States to rely on extrinsic sources to attempt to limit their otherwise clear obligations under the 1951 Refugee Convention.

The benefits to be derived from drawing upon the CRC as an interpretative aid in interpreting the 1951 Refugee Convention is most clearly illustrated in the context of the “being persecuted” standard. The challenges historically faced by children in satisfy that standard, and the potential for the CRC to provide a framework to assist in responding to those challenges, is addressed in the contributions from Anker (with Kelly and Carrera) and Crock. Both Anker and Crock have been at the forefront of advocating for a child-friendly understanding of the 1951 Refugee Convention, including the “being persecuted” standard; Anker through her cutting-edge work leading the Harvard Immigration Refugee Clinical Program, and Crock through her pioneering scholarship on unaccompanied refugee children.

I endorse, completely, Crock’s argument that determining what constitutes “being persecuted” must be driven by the “attributes, needs and situation of each individual child”, and that in cases of children with disabilities, guidance must also be taken from recent Convention on the Rights of Persons with Disabilities (“CRPD”). Indeed, this is the real value that the specialist treaties provide: they emphasise the importance of not looking at each individual through a monolithic lens. In the context of children, the CRC provides an automatic and principled means for adapting the persecutory threshold to take into account a child’s heightened sensitivities and distinct developmental needs.

In her contribution, Anker suggests that that domestic refugee jurisprudence in the United States is moving (albeit somewhat “haltingly”) towards a “generally internationalist, and more specifically human rights, approach to the interpretation of refugee law”. This is a very welcome development. The United States Citizenship and Immigration Service’s Asylum Officer training manual, cited by Anker, provides a clear illustration of this. Notwithstanding the fact that the United States remains the only country in the world not to have ratified the CRC, the training manual expressly acknowledges the link between the CRC and the “being persecuted” standard, providing a list of the “fundamental rights of children listed in the CRC that may rise to the level of persecution if violated”.

Although in many cases recourse to the generalist human rights treaties, progressively interpreted (e.g., the Universal Declaration of Human Rights, the International Covenant on Civil and Political Rights and the International Covenant on Economic, Social and Cultural Rights) may result in similar protection outcomes for child refugee claims, there is something deeply unsatisfactory about agreeing an international treaty that comprehensively sets out the range of behaviour that States have defined as unacceptable in the context of children, and then failing to have regard to that treaty in applying the “being persecuted” standard to children. The point has been lucidly made by the Federal Court of Canada: “[i]f the CRC recgonizes that children have human rights and that ‘persecution’ amounts to the denial of basic human rights, then if a child’s rights under the CRC are violated in a sustained or systemic manner demonstrative of a failure of state protection, that child may qualify for refugee status”: Kim v Canada (MCI) [2011] 2 FCR 448, [51].

Harvey’s contribution is characteristically perceptive, immediately identifying what sits at the heart of the book: the re-imagining of the relationship between international law on the rights of the child and international refugee law to ensure the widest possible protection for refugee children. Today a refugee lawyer must also be a human rights law. Advocates and decision-makers must test the authentic boundaries of the two regimes, drawing on progressive interpretations of the 1951 Refugee Convention, informed and/or supplemented by the comprehensive framework of rights enshrined in the CRC. To borrow Harvey’s language, there is a need for “creative lawyering”, firmly anchored in “existing normative commitments”, to ensure that “children’s voices will be heard and listened to” and that “processes and practices will change, often radically”. It is hoped that The Child in International Refugee Law can make a modest contribution to that important endeavour.

Jason Pobjoy is a barrister at Blackstone Chambers, where he has a broad practice including public and human rights law, refugee and immigration law and public international law. He appears regularly in the Supreme Court, General Court of the European Union, Court of Justice and European Court of Human Rights. He maintains a significant pro bono practice, and has acted pro bono for UNHCR, the Office of the Children’s Commissioner, Bail for Immigration Detainees, Medical Justice, the AIRE Centre, ILGA-Europe, the Equality Network and the International Commission of Jurists. Jason has published and taught widely in the areas of refugee law, public and human rights law and public international law. His monograph, “The Child in International Refugee Law” was published by Cambridge University Press in 2017. He is a Research Associate at the Refugee Studies Centre, University of Oxford. Read Full
More posts by the Author »
EJIL: Live!