A Footnote on Secession

A Footnote on Secession

We have had a very rich debate on secession on the blog in recent weeks, and we will have more posts to follow. For my part, I would agree with much of what Jure Vidmar has said in his post this week, with the proviso that I personally don’t think the argument out of comparative constitutionalism necessarily has much purchase – that argument is contextually specific, and what works constitutionally in Canada or in the UK need not be the position in Spain. The ultimate arbiter of the Spanish constitutional order – the Constitutional Tribunal – has (for good or ill) not gone the Quebec Reference path. I agree in particular that international law has little to say on the secession of Catalonia specifically; Kurdistan is a more difficult question (on which a bit more below). What I would like to do in this post, however, is take a step back and reflect more generally on how secession is regulated by international law – and it is indeed regulated, if not wholly so.

It seems to me most useful to conceptualize international law’s regulation of secession in a three part model. First, there are cases where international law explicitly prohibits secession, when it is being effected through the violation of some fundamental norm of international law, such as the prohibition on the use of force or the prohibition on racial discrimination – this was the case, for example, with the Turkish Republic of Northern Cyprus. Such fundamental illegality is an impediment to the achievement of statehood which otherwise satisfies the relevant factual criteria, and thus bounds effectiveness. Crucially, as the ICJ has confirmed in the Kosovo AO, among these norms is NOT the principle of territorial integrity insofar as it does not govern the relationship between the parent state and an internal secessionist movement; that principle is only relevant if a third state assists a secessionist entity, as with Turkey and the TRNC.

Second, there is a middle ground, a zone of tolerance, where international law is neutral towards secession, neither prohibiting it nor creating a right to it. This neutral zone is what is left over from the classical position towards secession in international law, which was essentially that in order to establish itself as a state against the wishes of its parent, the secessionist entity needed to fight – and win – a war of independence against its parent (e.g. the USA, or most of the states of Latin America).

Finally, in the third part, a zone of entitlement, international law creates a right to secession under external self-determination, or perhaps remedial secession. The argument of Serbia and most of its allies in the Kosovo advisory proceedings was essentially that no zone of tolerance existed between prohibition and entitlement; the argument of Kosovo and its supporters that international law at the very least tolerated the declaration of independence/secession. Serbia could also have argued that even if the territorial integrity principle did not generally prohibit non-state actors from declaring independence, it did so here because Kosovo’s independence was as a matter of fact enabled by an unlawful use of force contrary to the Charter by NATO in 1999. Serbia of course deliberately chose not to do so, and for three basic reasons: it did not want to antagonize the NATO powers, as this argument would inevitably do, the Resolution 1244 regime came after the initial use of force and authorized the presence of international forces in Kosovo, and it was highly unlikely that the Court would want to rule on it in the context of the advisory proceedings. 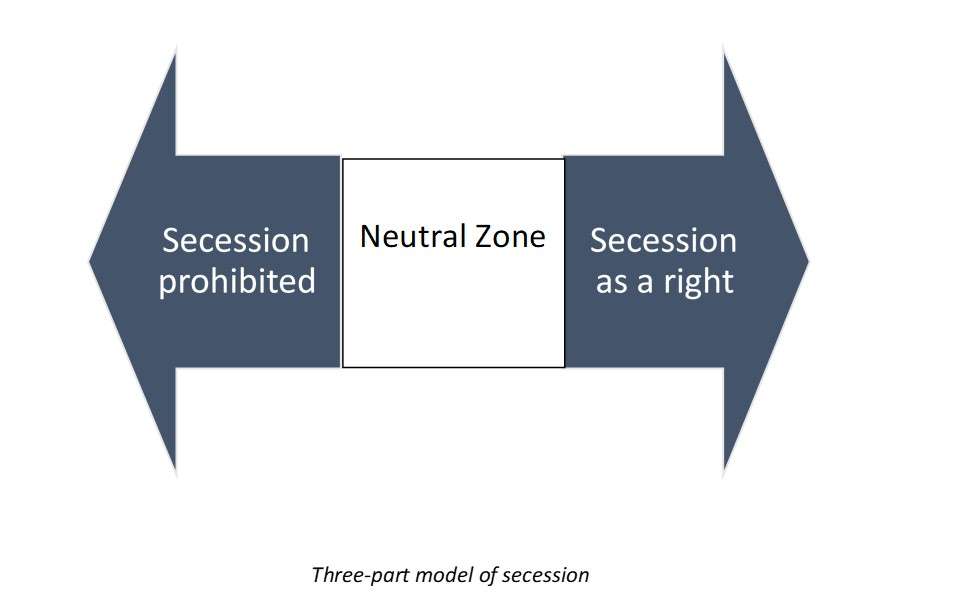 How do the second and the third component of the three-part model of secession differ? Under the neutrality paradigm an entity would need a great deal of effectiveness in order to successfully attain statehood; it would certainly need to build independent, viable, long-term institutions, free from the interference of the parent state, if it was creating a new state from scratch. Today the requirements for ‘winning’ in a unilateral secessionist claim are much stricter – perhaps even arbitrarily so – compared to the 18th or 19th century practice (see, e.g., Somaliland, whose claim to statehood goes unrecognized despite a significant degree of effectiveness). But a secessionist entity would need less effectiveness if it was in the third part of the model, i.e. if it had the right to secede; East Timor needed less effectiveness than say Abkhazia in order to become a state. Legality thus advances or compensates for effectiveness.

Reading through the debates we had on the blog, it seems to me (but I am happy to be corrected if I am mistaken) that we are all in agreement that Catalonia today falls within the middle, neutral zone of the three-part model. That is, its purported claim to independence is neither prohibited nor advanced by international law. It very much IS prohibited by Spanish law – and I agree with all of the commentators to Marc Weller’s post who said, contra Marc, that it is perfectly appropriate to judge the Catalan attempt at secession by reference to Spanish law. However, that domestic illegality as such has no bearing on international legality; virtually all unilateral secessions violated the municipal laws of the parent state, and this is neither here nor there for the position of an entity in the neutral zone.

But I was struck by how not even Marc – in an opinion commissioned by one of the secessionist parties – claimed that Catalonia had a right to secede, i.e. that it was in the third part of the model. And rightly so. Even if an entitlement to remedial secession existed in modern international law (and it almost certainly does not, on which more below), Catalonia is factually very far indeed from situations in which such a right might apply.

What then of Kurdistan, whose claim in that regard would historically be much stronger, in light of the extreme oppression that was inflicted on the Kurdish people under the Saddam Hussein regime? I would drop a second footnote here to the Kosovo advisory proceedings; another remarkable thing about that case was just how small a role self-determination and remedial secession played in it. For instance, only two pages out of almost two hundred in the first written contribution of Kosovo in that case concerned self-determination, and even there the main claim was that this was a point that the Court did not need to reach (as it did not).

That said, arguments were certainly joined with regard to remedial secession/self-determination. Of the 43 states (excluding Kosovo) that appeared before the Court in the three rounds of pleadings, 14 asserted that this right existed in principle, 14 denied its existence, and the remaining 25 were silent or neutral. When it comes to the five permanent members of the Security Council, only Russia endorsed remedial self-determination in principle (while rejecting its applicability to Kosovo on the facts; cf. its hypocritical position regarding Crimea), China opposed it, while France, the UK, and the US remained neutral. (For detail/references, see my chapter ‘Arguing the Kosovo Case,’ in M. Milanovic and M. Wood (eds.), The Law and Politics of the ICJ’s Kosovo Advisory Opinion (Oxford University Press, 2015) 21).

If we take the views of the committed states as expressions of their opinio juris, we can only really say that the question of the existence of the right to remedial secession would remain inconclusive if the states appearing before the ICJ were a representative sample of the international community as a whole. The silence of the neutral states cannot be taken as expression of opinio juris one way or the other, but it still speaks volumes, politically if not legally. Coupled however with the fact that no state in the world today clearly obtained its statehood by virtue of a principle of remedial secession, and that those claiming a right exist bear the burden of proving it, the absence of a concordant practice would seem to negate the existence of any such rule.

Even if the right was available, it could be exercised only as an ultima ratio. And this is where Kurdistan’s claim flounders; the government of Iraq today is not Saddam’s, and has no particular desire to systematically oppress the Kurds or deny them internal self-determination. Whatever positive entitlement to secession that they may once have had, that right has lapsed in the intervening years. Kurdistan is thus, like Catalonia, and like Kosovo, in the middle, neutral zone of the tripartite model above,  in which international law has to say the least. It is through politics, not law, that these matters can only be resolved.