70 Years of the International Law Commission: Drawing a Balance for the Future

70 Years of the International Law Commission: Drawing a Balance for the Future

This post, and its sister post on OpinioJuris, mark the start of the seventieth session of the International Law Commission. Under the theme “70 years of the International Law Commission: Drawing a Balance for the Future”, commemorative events will be held on 21 May in New York and on 5-6 July in Geneva. In these two posts, Christiane Ahlborn and Bart Smit Duijzentkunst of the Codification Division of the United Nations Office of Legal Affairs, which serves as the secretariat of the Commission, place the role of the Commission in a historical context and discuss its promises and challenges moving forward.

If Hugo Grotius is the “father” of international law, the progenitor of the codification movement is Jeremy Bentham (1748-1832). A lawyer, philosopher and social activist, Bentham strongly believed in the importance of positive law: “to be without a code is to be without justice”, as he put it (Letter to Daniel O’Connell, Works of Jeremy Bentham, Vol. X, p. 597). In his view, a comprehensive, written code would remove legal gaps and inconsistencies and make the law accessible to all. It would also guard against judge-made rules and – even worse in Bentham’s eyes – natural law (“nonsense upon stilts” (Anarchical Fallacies, ibid., Vol. II, p. 501)).

Bentham’s codification efforts extended to the international sphere. Like many later codifiers, he hoped that a set of written rules could prevent war and establish a lasting peace. His desire to rid international rules of the vestiges of natural law went so far that he proposed to replace the commonly used term “law of nations”, which encompassed an array of moral principles, with a new term: “international law” (An Introduction to the Principles of Morals and Legislation, ibid., Vol. I, p. iii). 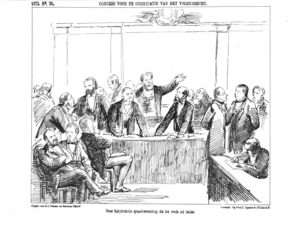 Over the course of the 19th century, the codification movement gathered steam. Several authors proposed their own international codes, such as the Swiss-German Johann Caspar Bluntschli (Das moderne Völkerrecht der civilisirten Staaten als Rechtsbuch dargestellt, 1868) and the Italian Pasquale Fiore (Il Diritto Internazionale Codificato e la sua Sanzione giuridica, 1890). In 1873 two associations were established to further the cause: the Institut de droit International and the Association for the Reform and Codification of the Law of Nations (now known as the International Law Association (ILA)). Among diplomats, lawyers and activists, codification became a political ideal on par with disarmament and free trade. The codification movement was so much in the public eye that a Dutch satirical magazine mocked the process in 1875, at the occasion of the third annual ILA conference in The Hague (see illustration). The cartoon is entitled “Congress for the Codification of the Law of Nations”; the comment reads “A Babylonian confusion of words that will [surely] lead to peace.”

The Institut and the ILA continue to influence the development of international law. They differ from the International Law Commission in that the latter derives its mandate and authority from an intergovernmental body, the General Assembly of the United Nations, and regularly interacts with governments in a formal fashion. It is the General Assembly, acting through its Sixth (Legal) Committee, that debates and decides on the fate of the outcomes of the Commission’s work. As a United Nations organ, the Commission also guarantees a representation of views from all corners of the world, as seats are allocated on a regional basis. Still, given the expertise of the Institut and the ILA, and the overlap in its membership with the Commission, the associations and the Commission mutually reinforce each other.

The League of Nations Committee

The International Law Commission is not the first codification body established by States. In 1924 the 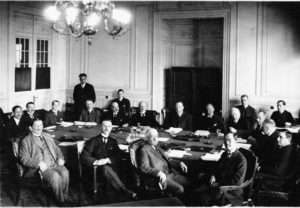 League of Nations appointed 17 legal experts to the “Committee for the Progressive Codification of International Law”. The Committee was chaired by Hjalmar Hammarskjöld, the father of the later Secretary-General of the United Nations, and its members included a young British lawyer called James Brierly, who would later be among the first members of the International Law Commission. Unlike the current Commission, the mandate of the League of Nations’ Committee was limited to identifying items “ripe for codification”.

Upon its recommendation, the League convened a Codification Conference in The Hague in 1930, to work on the topics nationality, territorial waters and State responsibility. The exercise proved overly ambitious: without draft conventions or negotiating texts, delegates found that they had too little time to cover the many complex issues on the agenda. As it turned out, codification involved more than mechanically transcribing customary law into written agreements; it also required the progressive development of new rules, to fill gaps and resolve conflicts – a political as much as a legal exercise.

In the end, the Conference produced few noticeable results. However, it did make general recommendations to improve the codification process, in particular regarding the importance of preparing draft conventions prior to convening a diplomatic conference. Many of the lessons from the 1930 Codification Conference informed the drafting, in 1947, of the Statute of the International Law Commission.

Pursuant to Article 13(1)(a) of the Charter of the United Nations, as well as its own Statute, the Commission is mandated to promote the codification of international law – the precise formulation and systemization of existing international rules – and its progressive development – the formulation of new rules of international law. Whether the Commission should focus on one or the other remains an oft-debated topic. The truth is that the Commission’s statute provides for both. Its drafters already acknowledged that the two are “not mutually exclusive” and that the distinction was only drawn “for convenience of reference” (A/331, para. 7). In their view, “no clear-cut distinction between the formulation of the law as it is and the law as it ought to be could be rigidly maintained in practice” (ibid., para. 10). Still, the distinction remains meaningful. A lack of differentiation risks either understating or overestimating the existing international legal obligations of States. 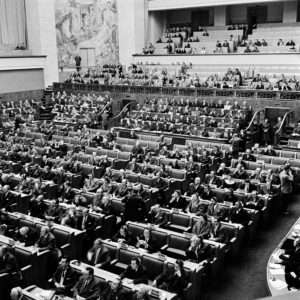 In seventy years the Commission has faced plenty of challenges, yet its results are remarkable. The 1969 Vienna Convention on the Law of Treaties and the 2001 articles on State responsibility for internationally wrongful acts and are well-known outcomes of its work. However, the Commission also laid the foundation of the current regime on the law of the sea: its 1956 articles concerning the law of the sea formed the basis of the first Conference on the Law of the Sea in Geneva in 1958, a process that set the stage for the subsequent negotiation and adoption of the 1982 United Nations Convention on the Law of the Sea. Moreover, without the Commission there may not have been an International Criminal Court: having worked on international criminal justice since its first session in 1949, it provided the first draft of the Statute that was negotiated during the 1998 Rome Conference. The Commission remains the main standard-setter in many technical areas, from transboundary aquifers to state succession. Through these activities, the Commission has laid – and continues to further – a solid legal foundation for peaceful international relations.

The exhibit on “70 Years of the International Law Commission” will be on display at the Visitors Lobby of the United Nations Headquarters in New York until 1 June 2018. It will then move to the Palais des Nations in Geneva in July 2018. For more information about the commemorative events, visit the website of the Commission .

Bart Smit Duijzentkunst is an Associate Legal Officer at the Codification Division of the United Nations Office of Legal Affairs in New York Read Full
More posts by the Author »
EJIL: Live!