Calls for Papers: Irish Yearbook of International Law; Hellenic Branch of the ILA

1) The editors of the Irish Yearbook of International Law welcome submissions for publication in the next volume of the Yearbook. Articles should not be published or under consideration for publication elsewhere. An annual, peer reviewed publication, the Irish Yearbook of International Law is committed to the publication of articles of general interest in international law as well as articles that have a particular connection to, or relevance for, Ireland. Articles are usually 10,000 to 12,000 words in length, although longer pieces will be considered. The Yearbook also publishes a small number of shorter articles and notes, which should not exceed 6,000 words. Submissions, comprising a brief 100-word abstract, article and confirmation of exclusive submission, should be sent to both Siobhán Mullally (s.mullally {at} ucc(.)ie) and Fiona de Londras (fiona.de-londras {at} durham.ac(.)uk) by 21 June 2013. Anyone wishing to review a particular title in the Yearbook’s book review section are also invited to contact the editors. Further information on the Yearbook (including style guide) is available at the IYIL website.

2) The Hellenic Branch of the ILA is holding a regional conference in Cape Sounion, Athens, on 29-31 August 2013. A call for papers has been circulated and is available here along with registration details and other information.

Filed under: EJIL Reports
Comments Off on Calls for Papers: Irish Yearbook of International Law; Hellenic Branch of the ILA

As part of the Schumpeter CONREASON Project, based at the Max Planck Institute for Comparative Public Law and International Law, an online expert survey is being conducted on judicial attitudes towards European law and European integration in the European Union. The survey focuses on supreme and constitutional courts and their doctrinal response to the legal integration process. The survey targets all those who are potential experts in the EU legal integration process: academics, judges, law students, etc.

The online questionnaire takes only a few minutes to complete. You can choose on which court you wish to report and even take several surveys in case you want to report on more than one court. To take the survey just click on the link below, which will take you to the survey page of the CONREASON Project Website:

Please feel free to contact the project team (conreason {at} mpil(.)de) for questions and remarks regarding the questionnaire. Feedback is welcome.

The International Court of Justice has issued a call for papers for a panel at its conference on the centenary of the Peace Palace in September. This is probably a first for the Court (at least I can’t remember it issuing a call for papers before), and the selection of the papers will be made by a panel of three of the Court’s judges. Appropriately enough, the Court seems to be accepting submissions only by snail mail. Details here.

Filed under: Conference, EJIL Reports
Comments Off on ICJ Call for Papers

This conference seeks papers pursuing empirical, normative, comparative or theoretical approaches to the study of ICTs, and welcomes contributions from law and social science, including philosophy, sociology, criminology, psychology and history. Details here.

Filed under: Conference, EJIL Reports
Comments Off on Pluricourts Call for Papers – Legitimacy and Effectiveness of International Criminal Courts

The ILA Study Group on ‘Principles on the Engagement of Domestic Courts with International Law’ has issued a call for papers. Those selected will be invited to participate in the discussion of their papers by the Study Group, and will be potentially included in a relevant publication. The deadline for submission of proposals is the end of May. Full details can be found on the Study Group’s website, and the call may be directly downloaded (pdf) here.

Regulating Resort to Force: A Response and Thanks to Corten

In the latest issue of EJIL, I write about doctrinal form and jus ad bellum in ‘Regulating Resort to Force: Form and Substance of the UN Charter Regime’, 24 EJIL (2013) 151. Much of the legal debate in this area – among states, scholars, and other international actors – takes place on a substantive axis, focusing on the scope of force prohibitions and exceptions: are they too broad or narrow; too permissive or restrictive?  In this article, I argue that these debates also sometimes explicitly or implicitly include preferences regarding doctrinal form, by which I mean modes of argumentation and analysis through which facts are assessed in relation to legal directives.

Adherents to one orientation, whom I term ‘Bright-Liners’, generally favour governing states’ legal authority to use force unilaterallyby clear and rigid rules that admit little case by case discretion. Adherents to another orientation, whom I term ‘Balancers’, generally believe that the legality of unilateral resort to force should be judged by objective but flexible standards that call for weighing contextual factors, thereby vesting in states some discretion to account for competing values.

The main point of my paper is that substantive preferences – narrow versus broad international legal authority to use force – often go hand in hand with doctrinal form preferences (i.e. those favouring restrictive authority to use force generally prefer bright-line rules), but that they need not.  By prising apart the substantive debate from the debate about doctrinal form, and analyzing some of the reasons why one form might be better than another, I expose some conflicting but often-buried assumptions about how international law works or fails in this area, and I aim to open up some underappreciated ways to think about legal reform. END_OF_DOCUMENT_TOKEN_TO_BE_REPLACED

Stepping Up the Pace of Ratifications of the ICC Amendments on the Crime of Aggression : Where do we stand now? 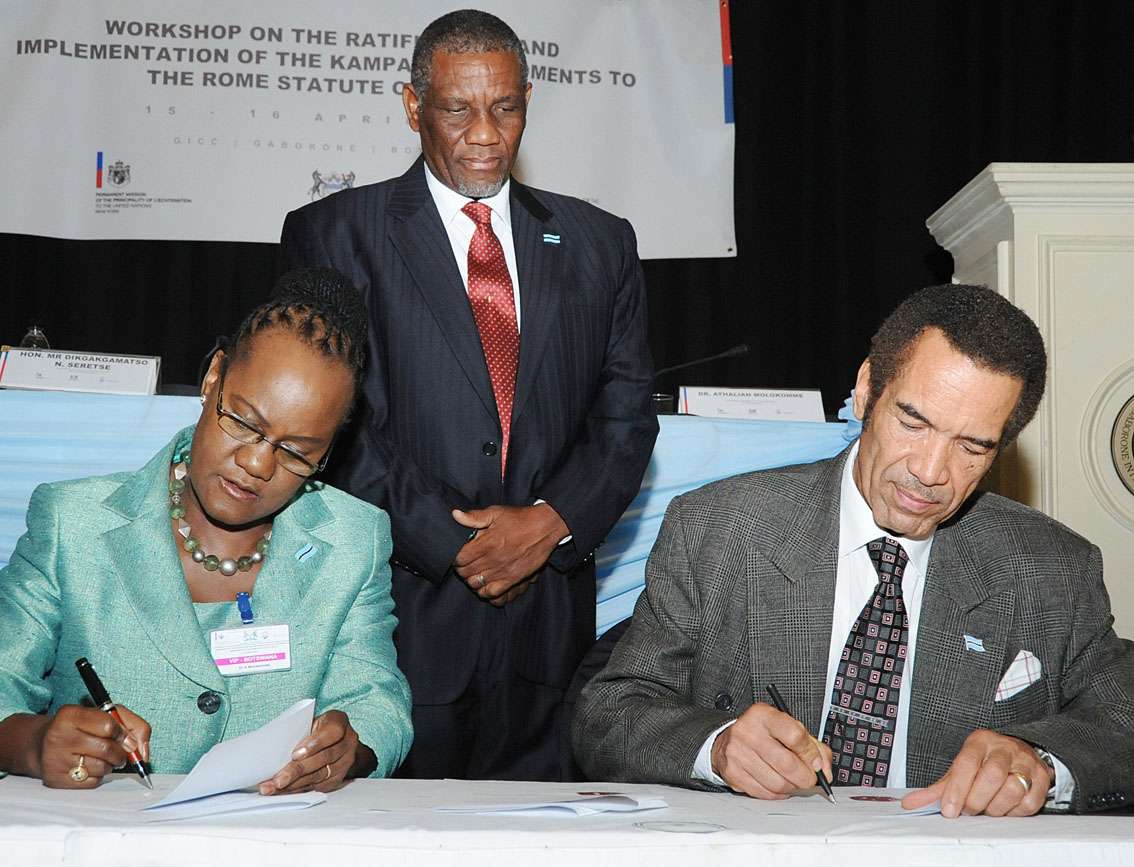 In the summer of 2010, the Assembly of States Parties to the Statute of the International Criminal Court, meeting in Kampala, Uganda, adopted amendments to the ICC Statute which define the crime of aggression and provide for the jurisdiction of the ICC over aggression. Under those amendments, the ICC will only be able to exercise jurisdiction over the crime of aggression once 30 States have ratified or accepted the amendments. Furthermore, the Court may not exercise jurisdiction over aggression until 1 January 2017. The amendment provides that there will also be the need for a further decision of the Assembly of States Parties to the ICC Statute to activate the jurisdiction of the Court over aggression. Unlike the Rome Statute of the ICC, ratifications of the Kampala amendments seemed to be going slowly with only 3 states (Liechtenstein, Samoa and Trinidad & Tobago) ratifying the amendments by the end of 2012. However, the pace of ratifications seems set to pick up in 2013. Luxembourg ratified the aggression amendment in January and Estonia did the same in March. In addition, two states – Germany and Botswana – have now completed their domestic processes for ratification and at least one other (Uruguay) is well on the way. The German parliament adopted its Act of Ratification of the Kampala Amendments at the end of February and should deposit its instrument of ratification soon. On April 15, the President of Botswana signed Botswana’s instrument of ratification of the Kampala amendment at a workshop held in Botswana that I was speaking at. He signed the instrument of ratification at a dramatic opening session of a workshop held for African governments on ratification and implementation of the crime of aggression. [On a personal note, I had never seen an instrument of ratification being signed before and I still have not as I arrived at the workshop after the opening session! The workshop was organized by the Government of Liechtenstein and the Global Institute for the Prevention of the Crime of Aggression which has a great website that contains many resources on the crime of aggression.] On April 10, one house of the Uruguayan Parliament (the Chamber of Deputies) approved the bill on ratification of the Kampala Amendments unanimously and the bill is set to go to Uruguayan Senate in the coming weeks (see this report by the Parliamentarians for Global Action).

For the court to be able to exercise jurisdiction over aggression by the beginning of 2017, there will actually need to be 30 ratifications by the beginning of 2016 as the amendments only take effect for each State party one year after the instrument of ratification is deposited. There seems to be a possibility that this number will be reached but that is not so clear. END_OF_DOCUMENT_TOKEN_TO_BE_REPLACED

Abstract submissions are sought for a conference on ‘Interpretation and International Law’, to be held at the University of Cambridge on 27 August 2013. The deadline for submission of abstracts has been extended to 8 May 2013. Abstracts, along with a resume, can be submitted via cambridgeinterpretation {at} gmail(.)com. For more information, visit here.

Filed under: EJIL Analysis
Comments Off on Conference Announcements: ‘Interpetation and International Law’
Page 2 of 212